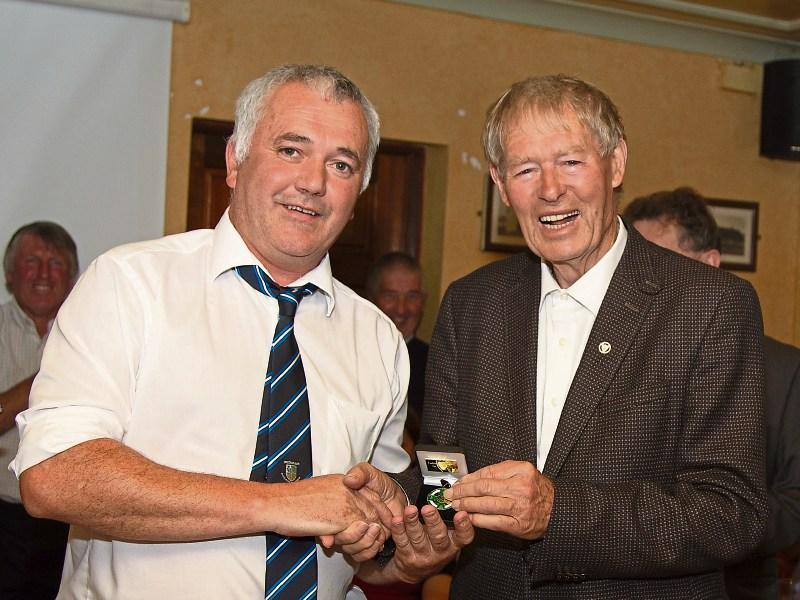 The final whistle had sounded and there was only one thing on his mind, with tears on his face he scanned Croke Park to find Seamus Flanagan.

This was the day of days in so many ways but to have a man from your club made it even more special.

For Pat O’Brien of Feohanagh this was a most special day, his daughters Keelin, Ciara and wife Caroline were with him and with the help of Stephen McDonagh he eventually got pitch side and the embrace was made.

It was something that made thousands of Limerick people happy but for Pat O’Brien who had supported, coached and helped in the development of Seamus Flanagan it was the fulfillment of a life’s dream.

Pat O’Brien loved his club and following Limerick teams was certainly not a challenge for him. It was where he wanted to be, the green and white meant so much to him and sadly at just forty nine he will see them play no more.

His sudden passing numbed the close knit community of Feohanagh and Castlemahon but it transcended around the entire county.

He will be remembered for many things but most of all he will be remembered as someone who couldn’t say no. If his club, parish, county, or a stranger needed help Pat O’Brien would be the first to put up his hand. He was that sort of person, honest, hard working and most comfortable when helping others.

Few people are better placed to remember Pat O’Brien than his clubman Pat O’Donnell. From his earliest days at underage to the man he saw play adult hurling with the club but more importantly the role he played in the clubs development over the last number of years.

Speaking to him this week Pat O’Donnell said, “ We have lost a very special member of our club and our community. Pat was one of those people that was very much at home helping his club, the community or his neighbours. He was a model volunteer that never looked for credit.

“ If there was a job to be done Pat would just go and do it. Trying to replace Pat is a challenge that is really impossible. He had massive pride in our club and took it upon himself to play a key role both in the preparation of teams and even more so in the facilities at the club.”

From the moment you turned off the main road at Banoke Bridge it was clear to see the admiration the entire community had for Pat O’Brien.

Club members were playing their part in what was a very sad occasion. It was no surprise that Pat O’Brien built his house close to the pitch at Coolyroe. You could hurl a ball to the pitch and clubhouse that consumed a very large part of Pat O’Brien’s life.

According to Pat O’Donnell his contribution was enormous, “It would be very difficult to put your hand on something that Pat had not done at the field. He just hoovered up work and it was a great tribute to him that he had the knack of getting people to follow his leadership.

“He managed to get them all going in the one direction. The young and the old had such admiration for him. He gave respect to all and it was clear by the huge numbers that turned up at his funeral they had huge respect for him.

“He found time for everyone and did every job to the best of his ability. Our club has produced a great number of people that have made a great contribution to the GAA and Pat O’Brien is certainly in that bracket. He wanted the club, the facilities to be the best they could be and never stopped working for the club.”

The Limerick Minor Team enjoyed a couple of great years in 2013/14 under Brian Ryan as manager.

Many of the players that went onto win a senior All-Ireland last year came from that minor team. Pat O’Brien was part of the back room team with that group of players and Brian Ryan reflected,

“Having good people involved in your back room team is hugely important and Pat played a very important part for us. He was so well liked by the players and was always ready to help in anyway. You need to have people you can rely on, you would never have to ask Pat to do a job a second time.

“He had a great way with the young players and I know he very much enjoyed bringing Seamus Flanagan to training each night. He worked well with Pat Creed and between them they always had everything in top shape.”

The academy structure has developed a lot of players and managers for Limerick, but outside of that, we have been very well served by others who have contributed a great deal.

“I think it is very important that we credit the people that work in the background and we have had many. Pat O’Brien was just superb, he was diligent and always took his role very seriously” commented Joe McKenna this week.

“People like Pat are great volunteers and much of the work they do goes unnoticed. Pat took his role seriously but he brought a great sense of fun with him and the young lads enjoyed that.” he concluded.

The former Limerick defender knew Pat O’Brien for a long number of years and is well placed to talk about him.

“It’s hard to think that Pat is gone. He was such a fine man that was always so obliging. If Pat told you he was doing something then it would be done.

“He was at home when helping people. I had involvement with Pat both hurling and otherwise and he always delivered. He really loved Limerick hurling, he would travel any place to watch a Limerick team playing.

“We had many long discussions about hurling and I would say he had a great knowledge of the game and the players. He was consumed by Limerick and was so happy when they won the All-Ireland last year.

“To see his own clubman playing such a part made him very proud. I would say that Pat was impressive at many levels but I will remember him as a man of his word.”

Over the last few years I have written about so many great people that made such a fine contribution to their clubs and the GAA at large.

Pat O’Brien can be happy that he played his part, he has left a legacy for others to follow.

For Pat it was about getting the job done, less talk more action would best describe him. The townlands of Ballinska where Pat lived has it’s own traditions, like when potatoes are set and dug the neighbours would gather in each others garden. It was a small community within a community. He took great pleasure in those traditions.

Frank Reidy probably summed it up well when he said, “It will take five men to replace Pat O’Brien in our club. There was always a project to be done and he always managed to complete the project.”

Pat’s wife Caroline showed immense courage to speak at the funeral mass. She told the overflowing church of the many fine qualities her husband had and the enjoyment he took from helping others.

My words will be of little consultation to Caroline, Keelin and Ciara but at this difficult time for them I offer my sincere sympathies on the death of a man that found happiness in helping others.