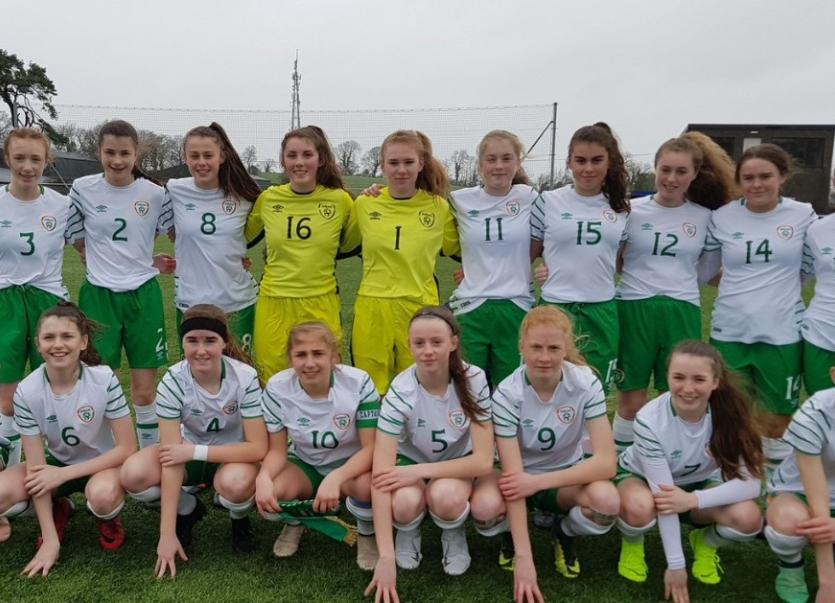 The Republic of Ireland U15 squad, including four Limerick players, who drew with Northern Ireland in an international fixture in Armagh

FOUR Limerick girls have been included in the 18-strong Republic of Ireland squad for this season’s International series which will see them travel to Salou to compete in the prestigious Bob Docherty Cup over the Easter Break.

All four Limerick players featured for the Rep of Ireland U15s in their 0-0 draw against Northern Ireland in their international fixture at the Armagh City FC grounds on Saturday last.

Indeed, the Player of the Match accolade from the game was awarded to Coláiste na Trócaire, Rathkeale pupil Nicole McNamara for her 'outstanding work rate throughout the game.'

The next outing for the Schools select, featuring the four Limerick teenagers, will see them face Sue Ronan’s Rep of Ireland Under 16s at Abbotstown on March 23. This session will be followed by the final training session on April 6 before the team jet off to Salou for the Bob Docherty Cup which will kick off on April 21.

The final selection of the Rep of Ireland squad for the tournament in Spain stems from months of assessment days and monitoring of players since the conclusion of the annual Interprovincial Tournament last November. The three day event saw 68 of the best player’s line out for their Province. This was the first step in a comprehensive review period for the management team which saw in effect of over 40 players screened.