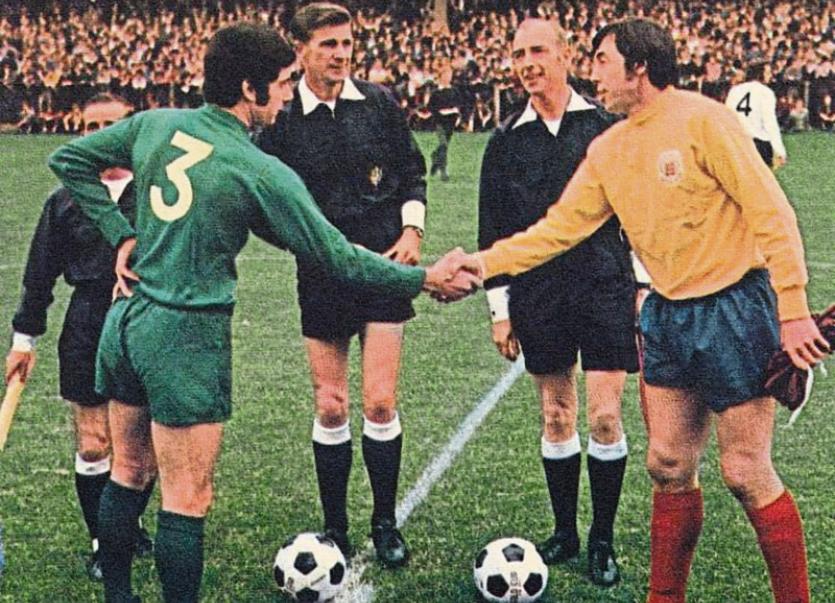 Limerick soccer legend Al Finucane, left, shakes hands with the late Gordon Banks prior to kick-off in a game between a League of Ireland XI and an English League XI at Lansdowne Road in 1971

The game took place at Lansdowne Road on September 22, 1971 when the Finucane-led League of Ireland side suffered a 2-1 defeat to the English League XI captained by Banks.

The funeral of Gordon Banks is being held at Stoke Minster on today, Monday, on the 47th anniversary of Stoke City FC's League Cup win.

Banks began his career with Chesterfield, was at Leicester when he won the World Cup in 1966 and was at Stoke when he won the last of his 73 caps for England in 1972. He died, aged 81, on February 12, after a long illness.

Banks was named Fifa goalkeeper of the year six times.

Finucane was never sent off and was booked only three times. He captained both Limerick AFC and Waterford Utd to FAI Cup glory.

Finucane is one of only two League of Ireland players to captain the Republic of Ireland at senior level.

The three-time FAI Cup medal winner won 11 senior captains for Ireland, captaining his country against Austria in Linz. Finucane also played in two uncapped internationals against West Germany’s Olympic team and Australia and played in an U-23 game against France.

The Limerick central defender’s League of Ireland career began with Limerick in a 2-2 draw against Shamrock Rovers at Miltown on December 4, 1960 as a 17-year-old.

Finucane, from Quins Cottages, in Rosbrien, moved to Waterford United in the 1973-’74 season where he remained until the start of the 1981-’82 season when he returned to Limerick Utd.

Finucane’s final two season’s in the League of Ireland were with Waterford Utd in 1986-’87 and Newcastle West in 1987-’88. The stylish defender made his final appearance in senior football for Newcastle West in their First Division tie with UCD at Ballygowan Park on April 10, 1988.