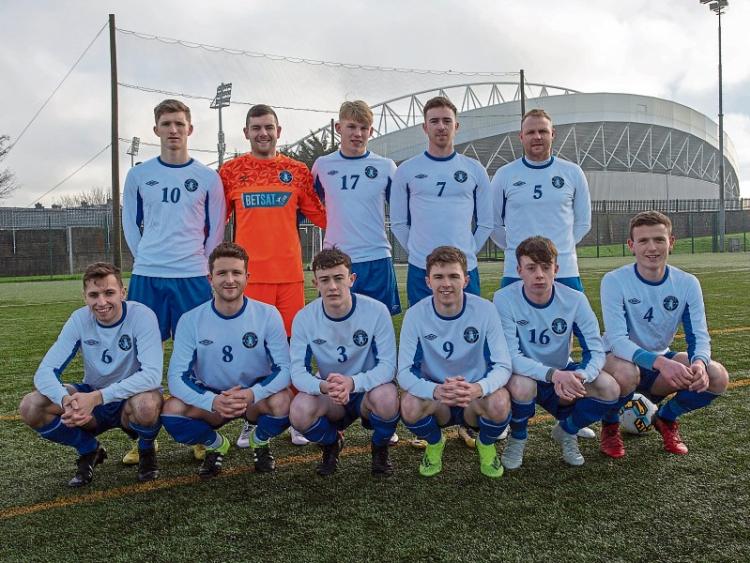 The Limerick FC side that played LIT in a recent friendly

I must preface this column by saying that nothing is ever straightforward in a Limerick FC pre-season, so all seemingly hyperbolic terminology here is probably merited given the context.

In the middle of all this, is a staff. Tommy Barrett has more patience, or at least as much patience, as any of his predecessors who suffered the same turbulence in years past.

The most positive news that came out of the club over the last few months was Will Fitzgerald and Karl O’Sullivan’s inclusion in the Irish U21 squad under the guidance of the ideal candidate in Stephen Kenny.

Everything else has just been radio silence and badly-worded tweets.

But as the board’s front is re-jigged to feign progress and preserve failure, perhaps a beacon of light is beginning to emerge.

At least, we can take it as such until proven otherwise.

That’s always been the problem, though. After a while, that saying needs to be reversed. Occasionally, those faithful to the cause need to see progress before they can be expected to anticipate it.

Limerick are back at the Markets Field, which, on paper, is fine, but the ill-taste and embarrassing scorns of a vocal section of the crowd still linger and the identity once-associated with the venue has long disappeared.

In reality, the Garryowen setting hosts a club who couldn’t afford to play there, and now, with less money, seemingly can. Who knows.

The club announced via their social media recently that a local consortium will fund the running of the club with a view to a complete takeover at season’s end.

There are few details about, but with Daly’s Car Sales appearing on the front of the jersey that is two positives to start with.

As expected, the majority of the questions will be based around figures and how much funding can be thrown into the first team to gain promotion. Of course, this is completely irrelevant in the short-term.

One truth that’s very hard for the Limerick sporting public to accept is that the Premier Division in Ireland is a much better place without Limerick FC in their current state.

They overextended budgets and there were ‘issues’ around payment of players’ wages at times.

Players had to up and leave mid-season, worry about their children, mortgage payments and every other form of financial responsibility someone can take on as a professional.

The League of Ireland top tier is only as strong as its weakest link, and that was Limerick – amazingly – as Bray’s social media exploits and on-field issues left a lot to be desired.

Now, the First Division welcomes the ‘SuperBlues’ – a level where their current entity belongs.

As is usually the case with Limerick soccer, a rebirth is required and if it’s to be off the back of this touted takeover, then so be it.

Limerick have debts to pay and not all of them can be accounted for on a spreadsheet.

They must regain the trust of a sporting public, of local enterprise to entice sponsorship and of the rest of the league to even begin engaging with their offers of employment.

It’s a long road and this current regime got stale from the second a return to the Premier Division was finally realised.

Now back in their overly-familiar surrounds of the second tier, Limerick can begin to find themselves again. They’ll aim to become a big club again.

But before all of that, they must become a club who are respected again in every industry they dabble in.

Limerick FC need to learn lessons, but the biggest lesson they must embrace is that, in order to be a big club, you must first become a stable club.

A Limerick man and a whole host of local players will aim to fast-track that rebirth. Results can always be a catalyst, but that’s all they are.

After ten years of obsession with the on-field product, the ‘Blues’ are now entering a season where the actual football is the least of their priorities.

For more on Limerick FC news throughout the season see www.limerickleader.ie or use #LLSport on Social media.