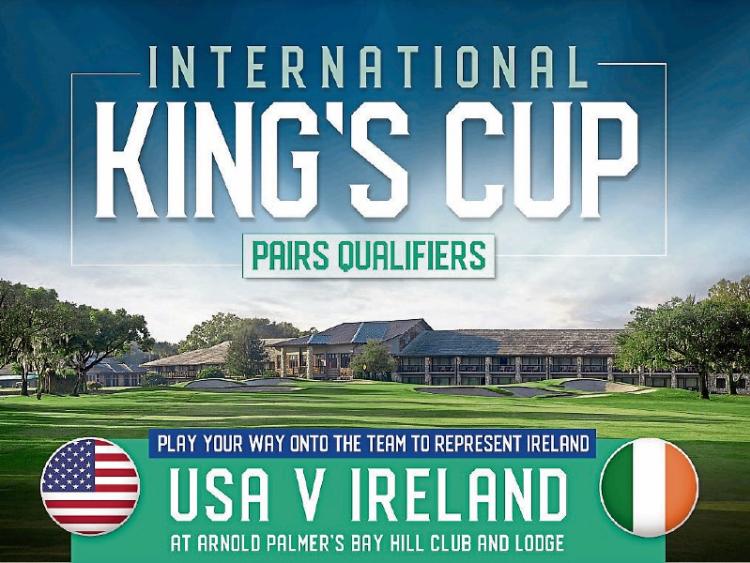 Ivan Morris still dreams of wearing the green of Ireland

GOLF is the most difficult of games, even for the young, strong and mighty. For those of us deep into the back nine of our golfing lives it’s harder still.

The battle with Father Time is unwinnable but that only means we should not give up until Angel Choirs are singing loud and clear and cannot be silenced.

While, I'm convinced that I have not quite reached retirement stage yet - although I can't be sure it's not that far away - a lingering and stubborn back injury kept me off the golf course for nearly four months last year.

But, now that I am back playing again (when the weather allows) I know that all it will take for me to get my enthusiasm and passion back is two 'perfectly played' holes in a row.

If I could find a compatible partner and be sure that we would be fully fit and competitive in time for the qualifying round for the King's Cup, scheduled for Ennis Golf Club on March 30, I'd be there!

The King's Cup is the opportunity of a lifetime to win an all-expenses paid trip (representing Ireland versus USA) at Bay Hill Golf Club, Orlando in the Sunshine State from May 19 to 25.

It is a better ball stroke play competition off full handicap, divided into four handicap groups to give golfers of all abilities a fair chance. There are two divisions, decided by age, in each group.

Golfers between the age of 18 and 54 and 55 upwards. A player over 55 can play in the open (younger) division but the senior division is obviously confined to the 55-pluses.

Find a partner with no more than an 8-shot difference to yours, add the two handicaps together and halve the result to see which category you qualify for: Championship 4.9 and under; A Flight: 5-9.9; B Flight: 10-14.9; C Flight 15 and above.

Munster entries can be made by contacting the Ennis Golf Club website. Entry fee is €50 per player.

If you qualify to play in the National Final at Malone Golf Club, Belfast on Thursday, April 4, there is a further €50 fee for that.

It's well worth a punt because included in the King's Cup Package (should you and your partner qualify) are: Six night stay at Bay Hill Golf Lodge; Breakfast every morning; Practice round with cart; Team Uniforms for each day with three rounds at Bay Hill included; Opening ceremony dinner; Lunch each day of the tournament; Awards dinner at the close of the tournament; Flights credit to value of €450; Memories and stories to last a lifetime! t's later than you think.

Time is running out and places are filling up fast!

An improving golfer is a happy golfer but you cannot improve without application. I know (too) many golfers who play off high handicaps who don’t care about getting better. They never practice.

They don't even try half the time. Their idea of warming up for a round is one quick practice swing before teeing off. If they miss a shot it means nothing to them.

They play for the social side of golf, the conviviality and being out in the fresh air, while taking some gentle exercise.

Nothing wrong with any of that you will rightly say and sometimes I wish I were more like them.

But, I still get the most enjoyment from practicing and hitting golf shots as I might have visualised them.

It's imbedded in my DNA. My father was one of the 'couldn't care less' brigade.

Golf to my Dad meant an excuse for a glass of Redbreast and a quick rubber of 45 afterwards with his pals.

The idea of being on the putting green for an hour working on his stroke, never mind being at the practice ground whacking balls, did not appeal to him.

Mind you, he never discouraged me from my marathon practice sessions and may have secretly admired them.

The strange thing is, I play with quite a few high handicap golfers who ask me how to hit the ball further and improve?

Although, it is a 'quick fix' they are usually after, it is satisfying to help someone to play a 'good shot' now and again.

At my age, the social side of golf is important and one of the reasons why I should continue to play even at a reduced level.

But I simply will not accept my limitations when it comes to playing with ‘young guns’ even if I can still outsmart them on rare occasions.

It's one of the frustrations of golf that there are no descriptions on the score card - only numbers.

More and more, I tend to play without keeping score except for counting the number of 'good holes' I might play.

If I can play nine or more good ones, I have had a good day! One thing that will definitely keep me active and happy is playing golf with my 8-year old grandson, George.

Amazingly, it keeps him happy too although he much prefers football.

I would too, if I were his age.

For more of Ivan Morris' columns see www.limerickleader.ie or use #LLSport on social media channels such as Twitter and Facebook.