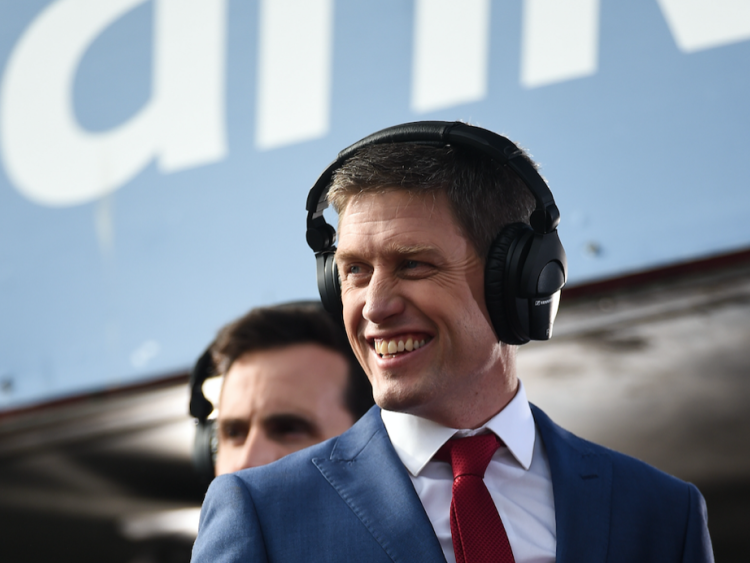 The now Canterbury Crusaders coach believes that tempo is key to Ireland's win and that one Munster player in particular is primed to steal the show.

"Tempo is the key for me really. It is going to be crucial. It may seem like a simple word, but it can mean things like picking up the speed of the line outs. It might not tell until the 72nd minute, but you need to increase that from last week. It is not a case of trying to beat Scotland at their own game, but Ireland will need to up their intensity to perform at a Tier One level again. Like they have proven in the past," O'Gara stated.

Following on from a defeat which saw Ireland struggle to get any continuity into their game, O'Gara believes that the ball carriers have a big responsibility in Murrayfield tomorrow afternoon.

"Ireland are all about the ruck, but that can matter for little if you don’t win the collisions. If you don’t win those collisions then you have to kick the ball. That was an issue for Ireland last week. Because we are not used to, not winning collisions, Johnny and Conor are used to playing on the front foot and at worst on the ‘medium’ foot. We were on the back foot, I don’t think we adjusted particularly well to that. Scotland aren’t as physical as England. There is no doubt about that. I think Ireland need to be more accurate in their ball carrying and improve their tempo. I think those two areas would be a big focus of mine."

So will the 32-20 loss to the 'auld enemy' dent Ireland's confidence, or make them a wounded animal?

"I don’t think the result would have shocked the players, but the manner of it would have. I think if you are not getting a shake after that, you never will. It was as big a thumping we have gotten at home in a while. People will say it was only a four point gap at one point, but after 76 minutes it was 19 points. As we know, in rugby, the killing minutes are from the 66th to 76th minutes. That is when you can break a team if you have set the tempo early. Even to see Joe Schmidt show disappointment in side was weird to see."

Scotland will pose a different threat in Edinburgh and Ireland have had to reshuffle the side. O'Gara believes that Scotland are beatable and Munster's Chris Farrell may have a big say in the outcome.

"The connection on one side for Farrell, in defence, will be great. He will have Earlsy on one side, chatting to him. On the other side then he will have Stockdale, who is relatively inexperienced at this level too, but will have learned from last weekend. I think Chris Farrell is a gem. Munster look almost 30% better when the is playing. I have analysed him for a while now. We would have looked at him, when I was at Racing and he played for Grenoble. He is a really balanced runner. Fast. Strong. His passing game is exceptional, as is his footwork and off loading. This guy is waiting to explode."

Farrell, who will win his fourth cap for Ireland on Saturday, won Man of the Match on his debut against Wales. So O'Gara believes he won't be overawed by the task, but coming into a side who have lost will have its difficulties and pressures.

"There will be butterflies for him. The team is coming off a poor performance so there will be a little more pressure to perform this weekend, for the whole group. It is not as if he is coming in to face England last weekend when Ireland were flying and when everyone thought Ireland were going to the World Cup final."

Scotland's performance on the other hand could all revolve around the 80 minutes that their mercurial out-half Finn Russell puts in. O'Gara believes the former Glasgow number 10 has matured into an instinctive player of great calibre.

"I think he deserves an awful lot of credit. I would have been critical of some of his performances before too. It is not easy for him to go into another country and lead a team in a different language. Racing are a little bit more settled than most French teams too. I think he is the most instinctive player playing the game at present. His relationship with Simon Zebo, off of nothing, is great to watch. They probably have one or two line breaks a game in France and often there will be one or two tries in a game that comes from their good actions on the ball.

"That is a big strike rate for Russell. He is a great passer of the ball. He has great feet. I think he has gotten better at taking the ball to the line. He is learning when to take it to the line and when to not. He doesn’t really have that ‘hail mary’ moment in him, that potentially would have been in one of four games in his past. It is now probably in one of twelve."

The day after the Ireland game O'Gara returns to New Zealand with just eight days to go until they begin the defence of their Super Rugby title against the rejuvenated Auckland Blues. The Corkman, who is in no rush to coach back 'at home' in Ireland, believes there is still a lot to learn in a team that reminds him of his own Munster Heineken Cup winning sides.

"My time in Munster reminds me of my time in Crusaders. They are both very player driven. There is a great bunch of players there. Take for example players like Paul O’Connell and Kieran Read. They are both the best in the world and they are also in the dressing room. People might not believe me, but you have to come down here to see that. There are huge similarities between those camps."

How about O'Gara the coach then. Is he the finished article having won both the Top14 and the Super Rugby title as a coach?

"I am still only finding my feet. This is my seventh year as a coach and I am always learning. You live in the now and I am so privileged to have such brilliant ‘pupils’ if you want to call it that, at the Crusaders. Engagement is key in anything and that is something the Crusaders are brilliant at. They are an absolute joy to work with. I get great fulfillment out working with them.

"That is a great driving factor watching lads who see you and coaches as someone to rely on. With younger players especially. We have a player this season, Leicester Faingaanuku. He was New Zealand U20 last season. When you get to work with someone like that, it is a brilliant project to work with. That is on an individual basis. I have a duty also to the Crusaders as a whole. That gives you a great sense of achievement when you see those players develop."