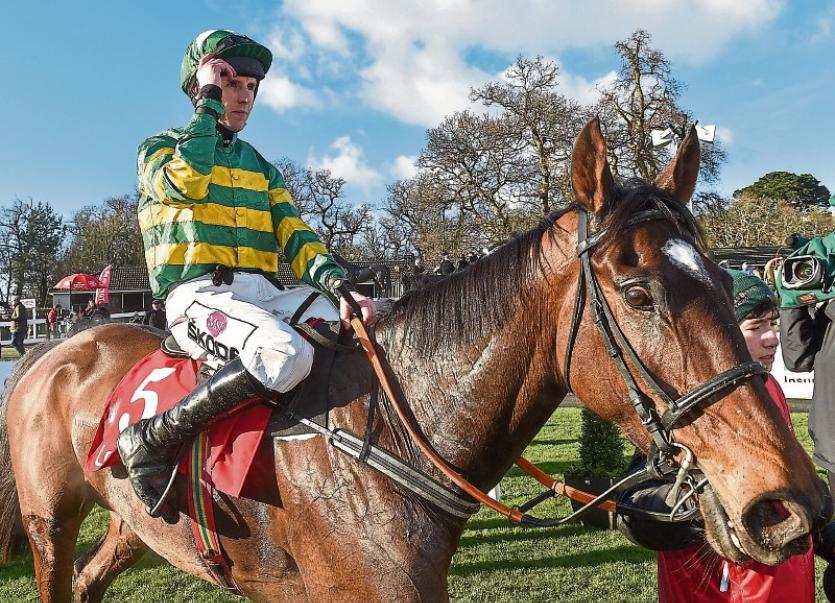 Off You Go, trained by Limerick handler Charles Byrnes, with Mark Walsh up, after winning the Ladbrokes Hurdle during the Dublin Racing Festival at Leopardstown on Saturday

LIMERICK trainer Charles Byrnes made it back-to-back wins in the €125,000 Ladbrokes Hurdle at Leopardstown with Off You Go in the colours of JP McManus.

Off You Go flashed home in the closing stages of the prized contest to get up under Mark Walsh for a thrilling success on the opening day of the Dublin Racing Festival.

The 8/1 winner claimed the €73,750.00 first prize for his connections, proving one length too good for runner-up Jezki, also owned by leading Limerick owner JP McManus.

Indeed, McManus’ famed South Liberties green and gold colours filled the first three places home as Ivanovic Gorbatov was half a length back in third.

Off You Go also won the big handicap for Ballingarry-based trainer Byrnes and Limerick jockey Mark Enright 12 months ago.

“I was going to ride this lad handy today and he said ‘no, take your time a bit because he was free the last day in Fairyhouse’.

“In fairness to Charles he gave me the right instructions and he had him spot on for today.

“Off you Go is 20lbs higher this year. The horse just keeps progressing and as I say Charles Byrnes is just a genius.

“You would like to think that there will be more to come from the horse, He has after winning two good pots here, so if he doesn’t win another one we will be happy enough.”

Fair play - Off You Go beat 27 rivals from 20lbs lower last year, and he wins the Ladbrokes Hurdle once again for @cbyrnesracing at @LeopardstownRC #DRF pic.twitter.com/Bw9rMYbSM9

Winning trainer Charles Byrnes said: “He probably needs slightly softer ground. He was only just getting there really. I am delighted with him.

“He stayed on really well. They are tremendous people to train for. It was fantastic for JP (McManus) to have the first three home, thankfully it was in the correct order for me!

“I am absolutely delighted. He is a lovely horse. He had a proper weight on his back today. He had only 9’ 10” last year and had 11’ 4” today. It was a proper performance.”

Byrnes explained that Off You Go could be aimed for a tilt at the County Hurdle or the Coral Cup at next month’s big Cheltenham Festival.