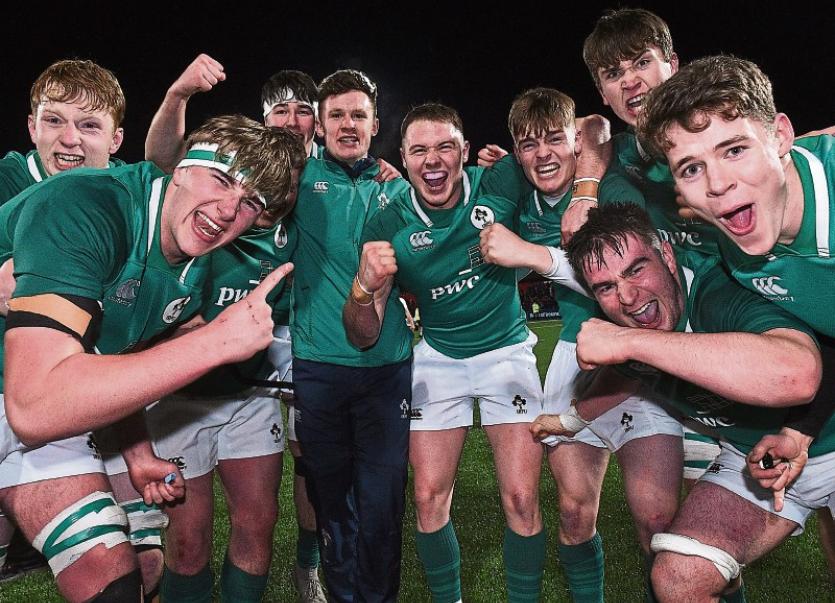 A NUMBER of Limerick players played starring roles as the Ireland U20s side stunned a fancied England U20s 35-27 in their Six Nations opener at Musgrave Park on Friday night.

Ireland’s successful side – who also bagged a precious try bonus point –  included Limerick scrum-half Craig Casey, vice-captain of the Six Nations U20 side, while fellow Limerick player Conor Phillips turned in an eye-catching display from the right wing.

Cadan Murley, Tom Willis and Josh Hodge scored tries for England in the first half, as well nine points from the boot of Marcus Smith, but Ireland hit back with scores of their own from Dylan Tierney-Martin and Scott Penny.

Harry Byrne added 10 points from the boot, but it was England who led 24-20 after a remarkable 40 minutes.

The second period was a much tenser affair but a try from Tierney-Martin and placed ball efforts from Byrne put Ireland in front and they emerged eight-point winners in front 5,764 fans.

Munster Academy member Craig Casey is a nephew of former Munster winger Mossy Lawler, Casey captained Ardscoil Rís to the semi-finals of the Clayton Hotels Munster Schools Senior Cup in 2017. Also a talented placekicker, Casey, who has played AIL rugby for Shannon this season, has represented both Munster and Ireland at U18 Schools level, captaining the latter in the U18 International Series in April 2017.

Winger Phillips lined out for Crescent College Comprehensive during his school days and has represented Munster at U18, U19 and U20 level. Phillips has impressed with performances for both the Ireland U18s and U19s with his ability to beat defenders and score tries.

The speedster lined out for Munster A in the Celtic Cup earlier this season and has also featured for Young Munster in the All-Ireland League’s top flight.

Bansha, Co Tipperary-born Jake Flannery made his Munster A debut in the Celtic Cup against Dragons A in September. The versatile Flannery has previously represented Ireland at U19 level.

He made four appearances for Munster A in the 2018/19 Celtic Cup and was signed up to the Academy in November 2018.

Wycherley has represented Ireland at U18 and U19 level, is a former pupil of Cistercian College, Roscrea.