Limerick club trio in Ireland womens side for 6 Nations opener 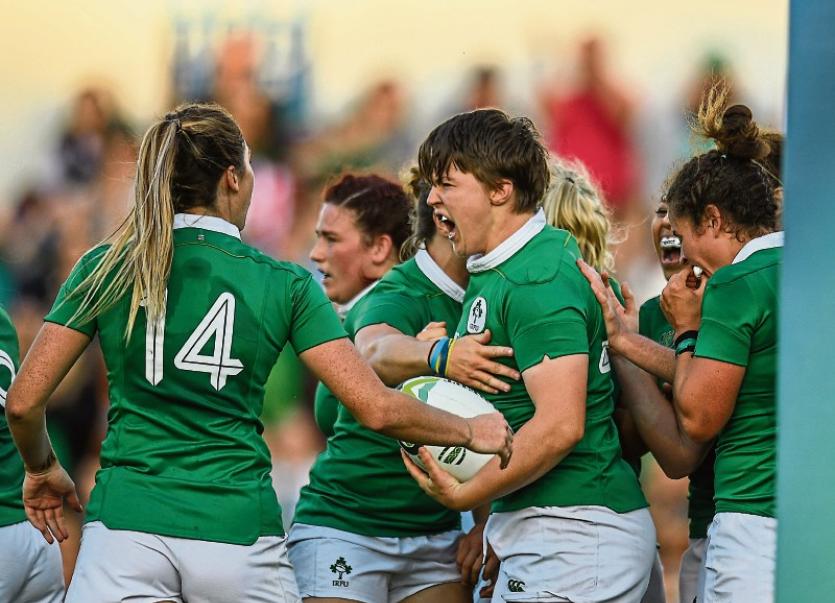 Ciara Griffin, centre, pictured celebrating after scoring a try during the 2017 Women's Rugby World Cup game with Australia, will captain Ireland in their Six Nations opener this weekend

THREE Limerick-based players have been included in the Ireland Women’s team to face England in the opening round of the Six Nations Championship at Energia Park, Donnybrook this Friday night, 5pm.

Up front, Leah Lyons is named at hooker with Laura Feely and Reidy joining her in the front row.

Aoife McDermott and Nichola Fryday are named in the second row with Juliet Shortand Claire Molloy named alongside Captain Griffin in the back row.

Lauren Delaney is named at full back with Considine and Megan Williams on the wings.

Sene Naoupu and Michelle Claffey make up the centre partnership with Nicole Fowley named at outhalf and Ailsa Hughes at scrum half.

There are three uncapped players named among the replacements hoping to get their first international run-out, Linda Djougang, Anne Marie O’Hora and Kathryn Dane.

Speaking ahead of the first test, Ireland Womens Head Coach, Adam Griggs said: “There’s no bigger challenge than to open the Six Nations against England, they are second in the world for a reason and are a very good side who challenge you in every part of the game.

“We had a good test against them in November and while we didn’t get the result, we showed some of the standards and improvements that are required to compete at this level which was a huge positive for us.

We have had good preparations leading into this Friday and are looking for a strong performance to get the championship started in front of what we hope will be an amazing crowd behind us."

*Denotes Uncapped player at this level