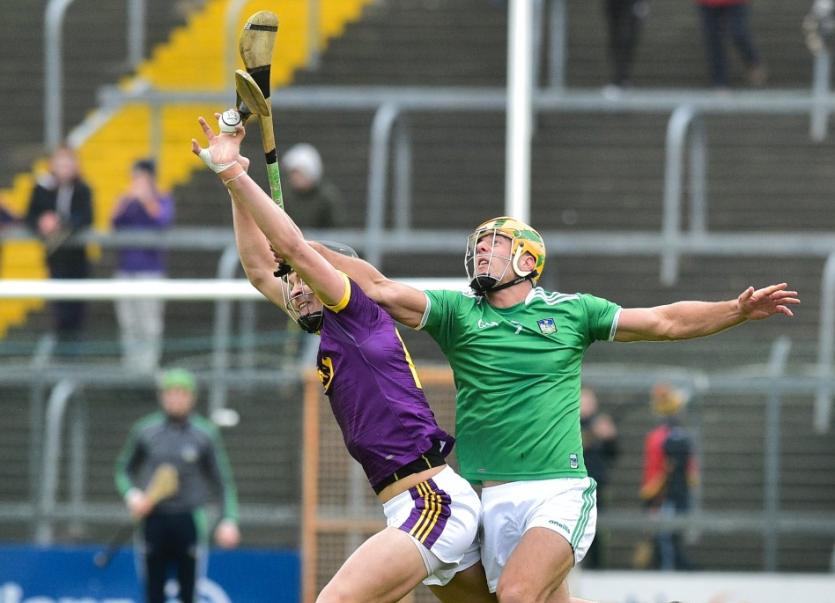 A winning start to 2019 for All-Ireland champions Limerick with a 1-17 to 2-11 Allianz Hurling League win over Wexford.

It was Limerick's first game back in the top flight of the league since 2010 and they held firm against a late fightback from Davy Fitzgerald's side to earn the Innovate Wexford Park victory.

Next up for John Kiely's side is the visit of Tipperary to the Gaelic Grounds on Saturday night (7pm) - a game that will be live on both RTE and eir Sport.

In Wexford, Limerick started with 11 of the All-Ireland winning team and showed all the skill and character of 2018 on a bitterly cold and blustery outing.

It was a game played for the most part with 14-men a-side.

Limerick had the strong breeze in the opening half and led 1-10 to 2-4 at the break.

It was a half that saw both down to 14-men in the 26th minute - Seamus Flanagan and Liam Ryan getting their marching orders from referee Fergal Horgan. The sending-offs came after a bit of a schmozzle when Cian Lynch was pushed dangerously into an advertising hoarding by Liam Ryan in race for possession over sideline. It appears Flanagan saw red as the third man in the fraca.

Wexford were 2-3 to 1-5 ahead at the time of the red cards but were to score just once afterwards in the half with Limerick adding five points in a half were there were five minutes added.

Two of the first half goals came in the opening 10-minutes - a rasper from Aaron Gillane responded to a sixth minute Cathal Dunbar green flag for the home side.

Limerick went ahead for the first time in the 12th minute, 1-2 to 1-1 after early Wexford pressure.

With the breeze a factor it was the 21st minute before Wexford had their first and only point from play in the half.

At the other end, Limerick's forward looked more dangerous and David Dempsey almost added a second Limerick goal but for a fine Mark Fanning save.

Wexford were back in front on 24-minutes when Jack O'Connor scooped to the net - 2-3 to 1-5 on the scoreboard.

There were another 15-minutes played and the men from the Model County scored just once. Nor they did they threaten the Limerick goal - just one Wexford wide in the half, compared to five for the men in green.

Three points from Peter Casey and 1-2 from Aaron Gillane led the way for Limerick in a half where John Kiely's side had five different scorers.

The lead could have been greater than three points but a 31st minute goal was ruled out for a square ball and then deep into injury time, a free was blown against Gillane after he fetched brilliantly on the edge of the square.

It was the 20th minute before there was a score from play in the second half and it came to Liam Og McGovern to leave it 1-13 to 2-7 to Limerick.

Before that Diarmaid Byrnes had two fine long range frees into the breeze for Limerick to maintain the interval lead.

There were chances for Limerick and the wides tally was up to 10, compared to just two for Wexford as the game entered the final quarter. Limerick were to finish on 15 wides and Wexford five.

A run of three successive points sparked Wexford after the 27th minute of the half and the lead was down to just a single point - 1-14 to 2-10 with five minutes to play.

But Limerick showed why there are All-Ireland champions with subs Darragh O'Donvan and Barry Murphy finding late points to ensure the win.