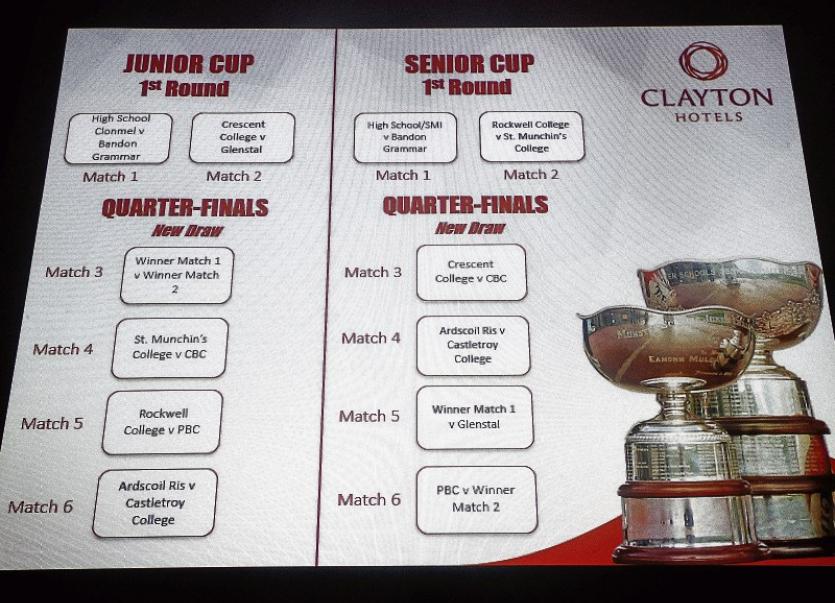 The Clayton Hotel Munster Schools Cups have kicked off this week

THE Clayton Hotels Munster Schools Senior and Junior Cups are set to be played under a much-changed format in 2020.

Teams in both the Munster Schools Senior Cup and Junior Cup competitions are set to play in a group stage competition pre-Christmas with the knock-out stages being played off from January 2020 onwards.

St Munchin’s College head coach David Quinlan was critical of the fact that teams competing in the Schools Senior Cups in 2019 would not get a second game in the competition if beaten in the opening round this year.

St Munchin’s bowed out of the Senior Cup when losing their first round game against Rockwell College at Musgrave Park on Wednesday.

A Munster rugby official said that while the Munster Schools Senior Cup is being run in a straight knock-out format this year, with no back-door in place, it is being done on a ‘once-off’ basis.

The official also pointed out that in the coming weeks a new secondary competition will be played off for the schools which do not advance to the semi-finals of both the Senior Cup and Junior Cup. The two competitions will be played down to a final.

The finishing touches is being put to a new format for the Munster Schools Senior and Junior Cups in 2020 which would guarantee every team five competitive games.

The plan is that teams will be divided into two pools of five teams each pre-Christmas where sides play each of the other four schools in their pool.

The new format is expected to be rubberstamped by the Munster Schools Committee at their next meeting in February.

The Munster official said: “The Munster Schools Committee has worked long and hard to change mindset. Five meetings have taken place. All schools were in agreement that the 2019 format was a once-off and next year there would be more games for players playing in both the Schools Senior and Junior Cups.

“It was a guarantee of just one game in the Senior and Junior Cups up to four years ago when the back door system was introduced.”

It is also envisaged that the fixtures in both the Munster Schools Senior and Junior Cup will be played on the front pitch at Thomond Park and at Musgrave Park, where possible, this season.