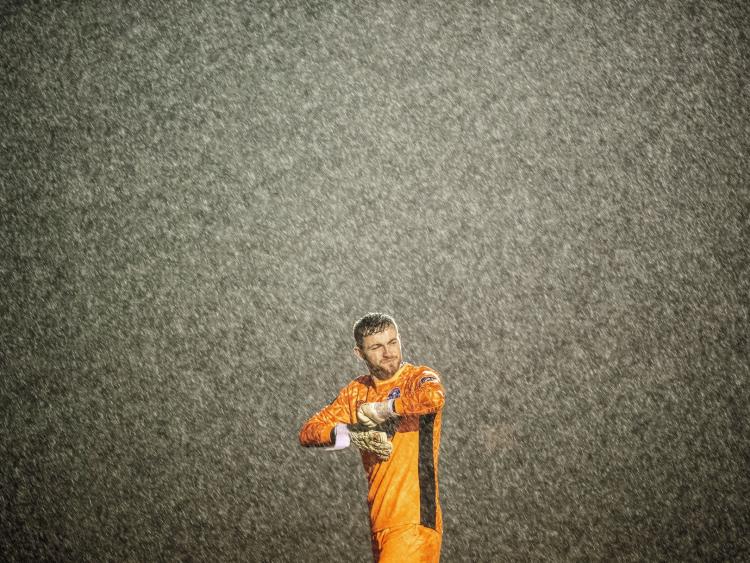 Limerick goalkeeper Tommy Holland, who conceded a late goal, following the pre-season friendly match between Finn Harps and Limerick at the AUL Complex in Clonshaugh, Dublin

LIMERICK FC suffered a last gasp 2-1 defeat to Premier Division Finn Harps in the second of their pre-season fixtures played at the AUL Complex in Dublin on Saturday evening.

Tommy Barrett’s Limerick side looked all set to gain a share of the spoils with the side which relegated them to the First Division at the end of last season only for the Blues to coughed up a decisive 90th minute goal from a free header at the back post. Limerick FC went in front as early as the third minute when recent signing Sean McSweeney scored to put them 1-0 up.

However, two goals inside the final 10 minutes, including that dramatic late winner, helped Harps edge to an unlikely victory.

The Shannonsiders made several changes to their line-up in the second half as preparations for the First Division opener with Longford next month steps up a notch.

Limerick FC are due to face the third of their pre-season games on Sunday next, January 27 when the First Division side travel to the RSC to face Premier Division Waterford at 2pm.

Limerick captain from last season, Shane Duggan moved to Waterford this season. The Blues kick-off life back in the First Division against Longford Town on Friday, February 22.