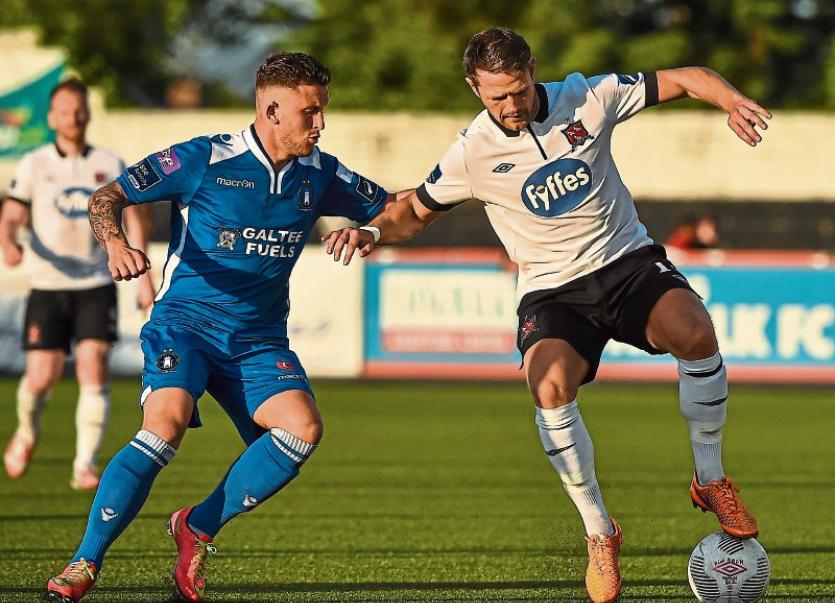 Jason Hughes, left, who has returned to Limerick, in action for the Blues against Dundalk's Dane Massey in 2015

FORMER Limerick FC midfielder Jason Hughes has re-signed for Tommy Barrett’s side ahead of the start of the new SSE Airtricity League First Division season.

Talented midfielder Hughes, who rejoins Limerick from Ballynanty Rovers, is one of two signings announced by Limerick on the eve of Saturday’s pre-season friendly with Cork City at The Farm, UCC, 2pm.

The second player Blues manager Barrett has added to his squad is Sean McSweeney who is also returning to the club and who, along with Hughes, is also set to be involved in the friendly with John Caulfield’s Cork City side on Saturday.

Twenty seven-year-old Jason Hughes began his League of Ireland career at Limerick 37 and made his debut in a 0-0 draw against Athlone Town at Jackman Park on 20 June 2008.

Hughes remained at Limerick until 2010 when he moved to Athlone Town.

After three seasons at Athlone Town, Hughes then returned to Limerick in 2013, before joining Sligo Rovers in the summer of 2015.

The Limerick man later moved to non-League English club Dorking Wanderers who played in the Ryman League Division One South, before returning home to play locally.