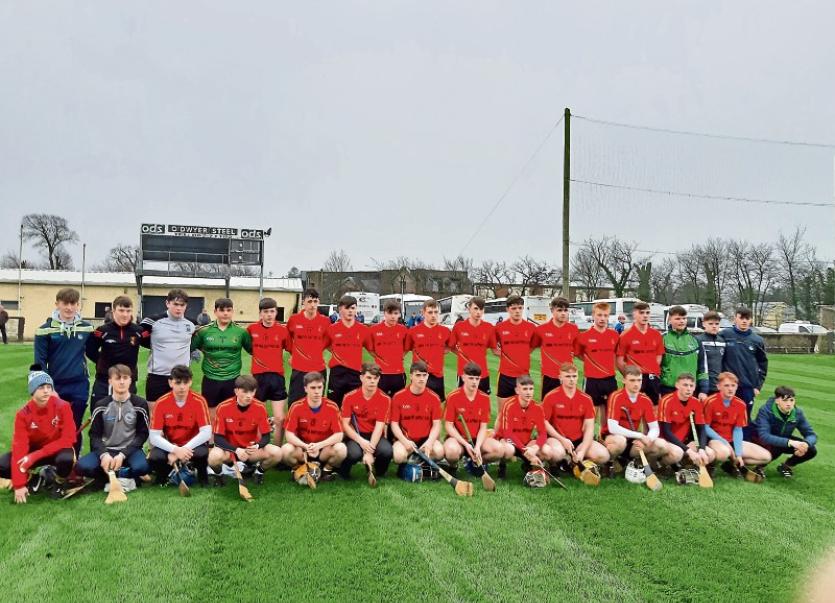 JOHN the Baptist Community School, Hospital must replay their Dr Harty Cup quarter-final clash with Thurles CBS after the sides could not be separated after 90 minutes of thrilling hurling action at Dundrum this Wednesday.

A monster pointed free from his own ‘65 by John the Baptist’s top scorer Dylan O’Shea ensured the sides finished level, 4-28 to 3-31, after two separate periods of extra time in a pulsating contest.

The replay is set to take place on Saturday, January 19 at a venue and throw-in time to be confirmed.

This cracking game served up a whopping 66 scores, including those seven well taken goals.

With supporters contemplating the game being decided on a '65 free-taking contest, it was subsequently confirmed that the quarter-final tie would go to a replay.

The sides had finished level, 2-20 each, at the end of 60 minutes, with Thurles snatching a draw thanks to a goal with the last puck of normal time.

John the Baptist had looked the better team for much of normal time and led by five point at half-time, 1-13 to 0-11, helped by a goal from midfielder Patrick Reale after 15 minutes from Brian O'Grady's neat pass.

When Thurles goaled at the start of the second half through Paddy Creedon - who went on to bag a hat-trick - Hospital responded in style when Ryan Tobin struck for a terrific individual goal in the 32nd minute.

However, John the Baptist failed to score for 15 minutes following that score and their opponents reeled them back and indeed led for the first time in the 46th minute through a pointed free from Devon Ryan.

Gradually, Hospital began to take a grip again and the Limerick side held a four-point advantage by the 58th minute, 2-19 to 1-18, with two points from substitute Peter Morrissey, Oisin O'Grady and topscorer O'Shea.

However, the see-saw nature of the game continued when Thurles struck for their dramatic last gasp equalising goal to force extra-time.

When the Tipp side reeled off 1-3 without replay at the start of the first period of additional time to lead 3-23 to 2-20, the Limerick side looked to be facing an uphill battle.

However, a goal from an O’Shea penalty proved the catalyst to a strong Hospital fightback and the sides finished tied once again at the end of those two 10-minute periods of extra time.

And so the fixture went into two further 5 minute periods of extra time. Tied at 3-27 each at the end of the first period of extra time, Garryspillane sharpshooter O’Shea, who scored 2-17 in all, steered Hospital a point to the good when his long range free ended up in the Thurles net.

However, two points in a from the Tipp side seemed to have swung the game in their favour until O’Shea’s late equaliser.

Afterwards John the Baptist team manager Ivor McCaffrey said: "It was a huge scoring game, a real shoot-out. It see-sawed. We'd take the lead, they'd come back, they go ahead, we'd come back.

"I thought we were nearly home and dry at the end of normal time and they came up with a wonder goal to force extra time.

"Then in extra-time they got a great start on us, scored 1-3 without replay, but we managed to crawl our way back into the game. Our lads worked very hard, got a draw out of it and then it was extra, extra time.

"Once again it see-sawed. From a supporter's point of view it must have been a real classic to watch.

"I have never been in favour on a match being decided by a free-taking competition or a penalty shoot-out. I never liked it in the World Cup in soccer or anything else.

"I don't think it would have been fair on players who had played the best part of 100 minutes with injury time included to decide it on '65s. I think it was only fair that it be decided by a replay."