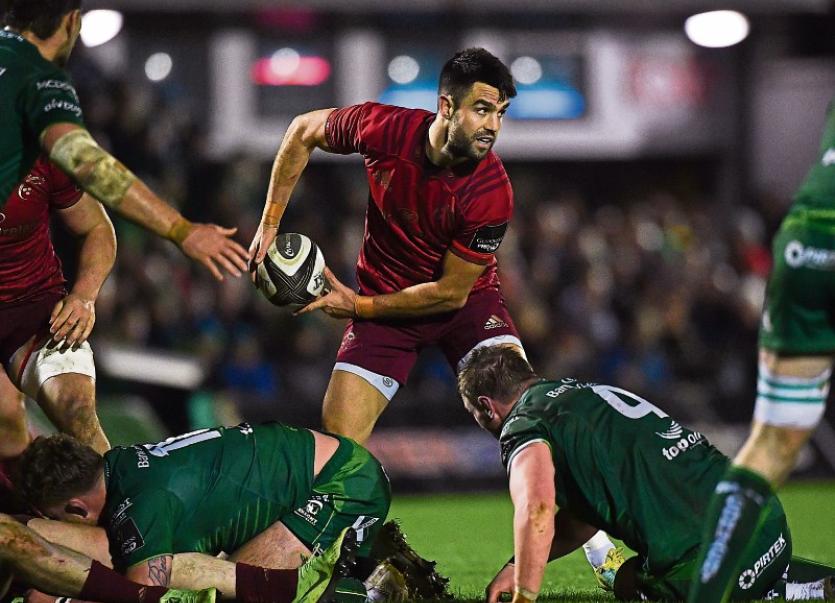 SCRUM-HALF Conor Murray said Munster produced a ‘really good performance’ to build into their return to Champions Cup action when seeing off Connacht in the PRO14 in Galway on Saturday night.

Munster assumed top spot in Conference A of the Guinness PRO14 when easing to a 31-24 bonus point win over Andy Friend’s Connacht at he Sportsground.

The victory was only Munster’s third away success in the PRO14 this season, following away wins at the Cheetahs and Zebre.

Munster currently sit on top of Pool 2 of the Heineken Champions Cup on 12 points, three clear of Castres. Friday’s opponents Gloucester prop up the table alongside Exeter on eight points.

The introduction from the replacements bench of experienced Ireland internationals Conor Murray, CJ Stander and Dave Kilcoyne, as well as second-row Billy Holland, who was making his 200th appearance for the province, swung Saturday’s game in Munster’s favour.

Murray said he had been impressed with what he saw from Munster before being introduced to help close out the win.

Murray said: “Yeah, I was impressed with what I saw. It came be a tough game against Connacht because they do attack a lot. They like to counter-attack, they’re dangerous.

“I thought coming on, just to fit in and get into our system, but there was a good calmness about us, especially when we went under pressure late in the game.

“There was just a good clarity and we knew what we were about and we executed a lot of what we were trying to do pretty well. Never the perfect game, but a really good performance to build into Europe, I think.

“With the three interpros over Christmas, and rotations in the squad, a lot of lads who are close to the team get a bit of gametime and who knows what will happen next week with selection with injuries or whatever, so I think the Christmas period was really beneficial for our squad.”