WATCH: Munster top of PRO14 Conference A after bonus point win in Galway 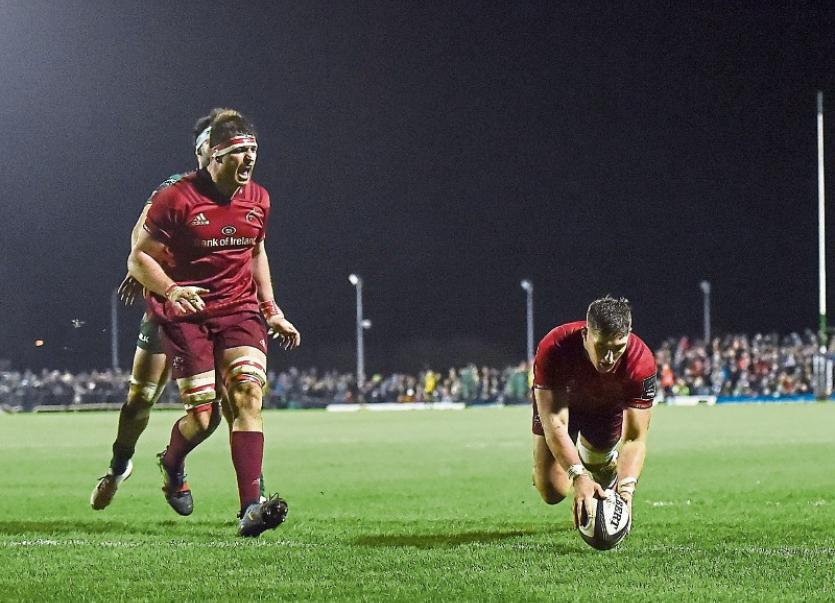 MUNSTER moved top of Conference A of the Guinness PRO14 with a pulsating 31-24 bonus point win over Connacht at the Sportsground on Saturday night.

Johann van Graan’s charges notched four tries, two from centre Dan Goggin and one each from Man of the Match Joey Carbery and flanker Peter O’Mahony, to end a run of six successive away defeats to Irish sides in interprovincial games.

This was only Munster’s second win in their last five visits to Galway. The introduction of internationals Conor Murray, CJ Stander and Dave Kilcoyne off the bench in the second half, helped Munster gain a decisive grip on the game against a Connacht side which had won six of their seven previous games.

The win, only Munster’s third away from home in the PRO14 this season, is a big boost to Munster ahead of next Friday night’s crucial Champions Cup game away to Gloucester at Kingsholm, 7.45pm

After a frantic, frenetic opening, Connacht, roared on by a capacity crowd of 8,129, struck for the game’s opening try on 10 minutes when centre Tom Farrell ripped the ball from Munster back-row Arno Botha before scampering more than half the length of the pitch to score.

Out-half Jack Carty duly converted to help the home side into a 7-0 lead.

Back came Munster, however, and flanker Peter O’Mahony, touched down after collecting Keith Earls’ pass as the visitors recyled the ball impressively.

Joey Carbery was on target with the conversion attempt to tie up the scores at 7-7.

Munster were denied a second try in the 27th minute after when the TMO judged that John Ryan hadn’t managed to ground the ball over the line.

Perfect response from Munster as @peterom6 powers over for the 500th try of the @PRO14Official season.

The visitors would not be denied, a minute later from the resultant five metre scrum as centre Dan Goggin powered over from close range. Carbery’s conversion made it 14-7 to Munster.

Carrt reduced Munster’s lead to four at the break with a 40th minute penalty.

The home side were in front a minute after the retstart when winger Cian Kelleher darted over for their second try. Carty’s conversion made it 17-14 to the home side.

Back came Munster in a see-saw battle and a second Goggin try helped Van Graan’s side regain the lead, with Carbery converting.

The out-half soon added a penalty goal and a try of his own for a 31-17 lead for the home side. Connacht did hit back with a try from playmaker Carty, which he also converted but Munster held out for a precious victory.