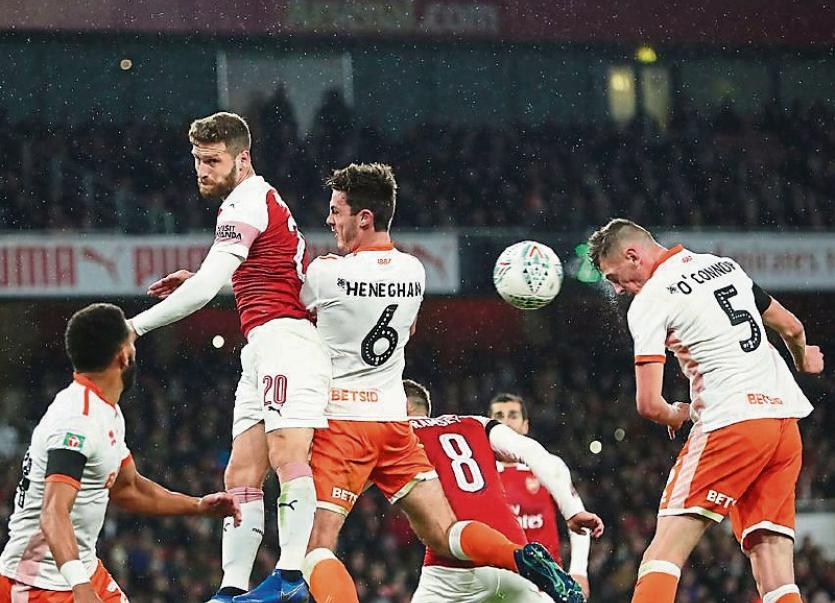 Ballybrown’s Paudie O’Connor and his Blackpool team mates set up their glamour FA Cup third round tie against Premier League high flyers Arsenal after the Seasiders defeated non-league side Solihull Moors 3-2 in extra time in their second round replay.

Saturday evening’s big FA Cup third round tie which kicks-off at 5.30pm will be shown on BT Sport.

Twenty one-year-old O’Connor has made 10 appearances, including seven starts for Blackpool, who he joined on-loan from Championship high-flyers Leeds Utd last summer.

The classy defender started in defence for Blackpool in their 1-0 defeat to Sunderland in Sky Bet League 1 at Bloomfield Road on New Year’s Day.

While Arsenal lie in fifth place in the Premier League, Blackpool currently sit in 10th place in Sky Bet League One.

It will now be the second time that English League One side Blackpool will have faced 13-time FA Cup winners Arsenal this season after losing 2-1 at Emirates Stadium in the fourth round of the Carabao Cup in October.

Limerick man O’Connor scored with a header that night against the Gunners, but was later sent off, as his side suffered a dramatic 2-1 defeat to Premier League giants Arsenal in the fourth round of the Carabao Cup at the Emirates Stadium on Halloween night.

The Limerick native might well have scored two goals on the night, but was unfortunate to see his 53rd minute effort on goal from another corner come crashing back of the woodwork.

Paudie O’Connor featured 39 times for Limerick FC in the SSE Airtricity League prior to his switch to Leeds.