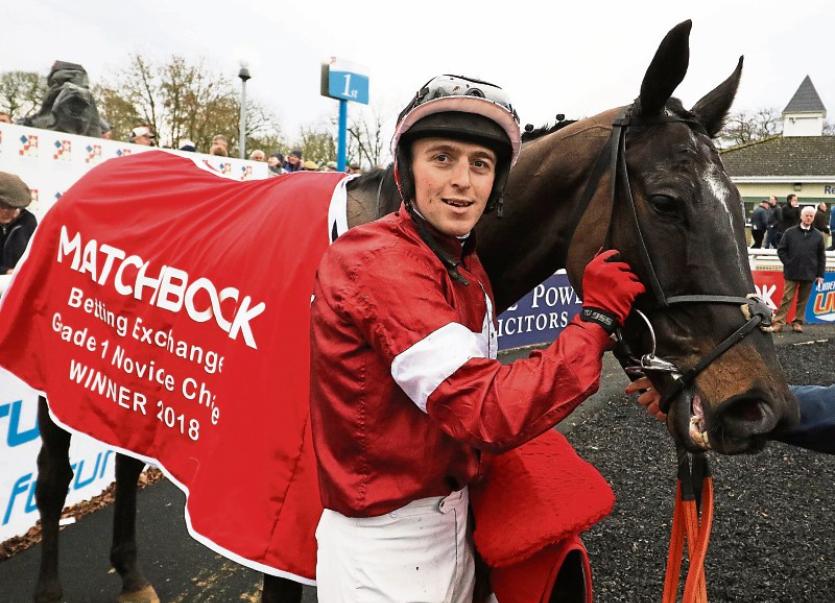 Hardline and winning jockey Keith Donoghue after their success in the €100,000 Grade 1 Matchbook Betting Novice Chase at Limerick Racecourse on St Stephen's Day

A BUMPER attendance of 13,982 thronged the enclosures at Greenmount Park on St Stephen’s Day, the opening day of the four-day Mr Binman Limerick Christmas Racing Festival

The mild and dry weather resulted in an increase on the 13,808 who turned out on the opening day of the 2017 Festival.

Twelve-time Irish champion jockey Ruby Walsh made his first St Stephen’s Day visit to Limerick Racecourse in 22 years, but he was out of luck in the first ever Grade 1 contest to be staged at the venue, when his mount, odds-on shot Getabird, was beaten into second place in a dramatic running of the €100,000 Matchbook Betting Exchange Novice Chase.

Getabird, who went off the 8/15 favourite, made a mistake at the last fence which allowed the Gordon Elliott-trained Hardline to prevail by half a length at odds of 9/2.

Hardline holds on to take the Grade One Novice Chase in Limerick and deny Ruby Walsh aboard Getabird #RTEracing pic.twitter.com/RH8g3QnCbe

Earlier in the day, Walsh had won the Signplus Hurdle with 11/8 favourite Salsaretta for leading trainer Willie Mullins.

Betting turnover with the bookies’ reached €281,000 with the on-course bookies on the opening day of the Festival, up significantly on the figure of €189,500 recorded 12 months ago.

The Festival, set to attract more than 40,000 racegoers to the Patrickswell venue, is one of the biggest highlights of the local sporting and social calendar and provides a multi-million euro bonanza for the local economy.

The opening race on December 27 is off at 12.25pm, with the feature race being the Tim Duggan Memorial Handicap Steeplechase, a Grade B contest with a €50,000 pot.

Limerick racecourse general manager, Patrick O’Callaghan continued: “Then, on December 28, the feature is the Irish Independent Hurdle, a Grade 3 race with a €34,000 pot up for it. Our first race that day is due off at 12.30pm.

“Also on that day, we have the Sunway Holidays Most Stylish lady competition, a firm favourite on the social calendar, with some very good prizes up for grabs there.

“Come December 29, some parents with small kids might be getting a small bit of cabin fever.

“We are doing a special on-line offer for the last day of two adults for €20, kids U-12 are free, so it is not a very expensive day out at all.”

See www.limerickleader.ie for the best coverage of the Mr Binman Limerick Christmas Racing Festival, both in our print editions and on-line.