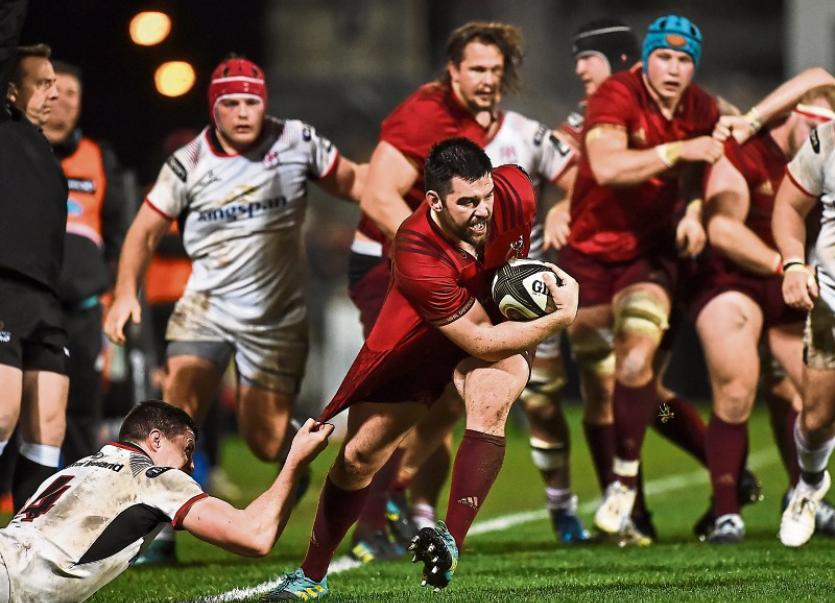 A DRAMATIC penalty goal with the last kick of the game from replacement Bill Johnston helped Munster secure a precious losing bonus point in a 19-12 defeat to Ulster in the Guinness PRO14 at Kingspan Stadium on Friday night.

However, it was the referee’s decision to show a yellow card rather than a red to Ulster winger Robert Baloucoune inside the opening 15 seconds for a tackle in the air on Munster winger Darren Sweetnam which provided the biggest talk point from the game.

Munster’s sense of disappointment at match officials for the second successive weekend was only added to when Baloucoune went on to score one of Ulster’s three tries in the second half.

Former Munster second row Donncha was in no doubt but that the winger should have been red-carded.

O’Callaghan said on eirSport TV: "It's reckless, there's no care for Sweetnam in the air. For me it is a red card. You've got to look after guys."

While an understrength Munster may feel hard donw by with that early referee’s decision, the home side ran out deserving winners with Rob Herring and Dave Shanahan also scoring tries.

Munster have won just twice on the road in any tournament this season at the Toyota Cheetahs and at Zebre.

The Munstermen have not beaten a fellow Irish province away from home since their victory over Connacht in Galway in December 2016.

Munster had prevailed with a record 64-7 win when the two last met but this was to be no repeat for a much-changed Munster side with hooker Herring scoring the only try of the first half.

Defeat keeps Munster second in Conference A after a tough encounter, with the festive feast of derby clashes only just beginning in the Guinness PRO14.

"I've seen red cards for less - by the letter of the law he should be gone." Eddie O'Sullivan says Ulster winger Robert Baloucoune was lucky not to get a red card for his early challenge on Darren Sweetnam. #GuinnessPro14 #ULSvMUN pic.twitter.com/UCzfe1cnfp

After Ulster led 7-3 at half-time, out-half JJ Hanrahan made no mistake with a penalty following a high tackle.

That prompted the hosts to bring Rory Best on to the field to great acclaim – and it wasn’t long before he played a part in Ulster’s second try.

His pass then found Baloucoune who had the simple task of crashing over, with Burns’ conversion extending the lead to eight points.

With Ulster losing just once at the Kingspan since February, Munster needed to produce something special to snatch the points against a side that had won five from six in all competitions.

"A loss will never be good enough, but they really put their heart and souls into this one, and I am very proud of the way they fought." Munster head coach Johann van Graan after his side's 19-12 defeat to Ulster at Kingspan Stadium on Friday. #GuinnessPRO14 #ULSvMUN pic.twitter.com/lxrI1eYJ20

Bill Johnston’s penalty 15 minutes from time aided that cause to make it 14-9, with a grandstand finale in store at the Kingspan.

And it was Ulster who wrapped up the win four minutes from time, another superb offload from Best allowing Shanahan to crash over for the third and final try of the game.

Munster had the muted final say though, Johnston’s penalty giving them a potentially-vital losing bonus point.

Next up for Munster is a ‘sold-out’ meeting with Leinster at Thomond Park on Saturday, December 29, 5.15pm.