According to Teneo Sport, the hugely successful year for Irish rugby, the success of our women’s hockey team and a slight decline in the popularity of soccer have all lead to the GAA being Ireland's new number one sport.

All reflected in the findings of the Teneo Sport and Sponsorship Index 2018 (TSSI) which were released today.

Soccer came out on top in terms of being Ireland’s Favourite Sport for eight consecutive years from 2010 when this research was first carried out.  Now in 2018 it loses that grip in terms of popularity somewhat amongst the general public for the first time to Gaelic Games.

The popularity of Gaelic Games (football, ladies football, hurling and camogie) has enjoyed a significant jump over the last twelve months gaining 4 percentage points as it moved from 17% in 2017 to 21% this year.  It has climbed 6 percentage points in total since 2013.  One major contributing factor has been Gaelic Games popularity amongst females strengthening, mirroring the overall popularity jump from 17% to 21%.

And after one of the most memorable years ever for Irish rugby, the sport is in third place on 14% while 43% of respondents said they liked or were interested in it.

The TSSI is a comprehensive 1,000 person nationally representative survey with quotas imposed across gender, region, age and social class.  The research was carried out by Teneo’s Sports and Sponsorship team and iReach and examines the Irish general public’s attitudes towards sport and their sporting heroes.  This is the view of the general public and not a survey of sports fans.

Team of the Year

In a year when they won a Grand Slam, won a test series in Australia and beat the All Blacks for the first time ever on home soil, the Ireland rugby team come out on top as Team of the Year.  They earned top billing with 43% overall.  In doing so they remain the Team of the Year for the fifth year running.

The Ireland women’s hockey team captured the hearts of the country during the summer and took 17% of the vote in the TSSI to finish a clear second.  Limerick’s All-Ireland winning hurlers came in third on 8%.

Some of the regional variations make for very interesting reading.  For example, in Connacht/Ulster a whopping 62% ranked Joe Schmidt’s side as the Team of the Year while in Dublin both the Dublin senior footballers and the Leinster rugby team pushed the Limerick hurlers out of the top four places.

Interestingly the senior All Ireland winners in football, ladies football, hurling and camogie polled 19% of the vote between them.

Rugby dominates a number of other categories, including when it comes to rating the Greatest Sporting Achievement in Irish sport in 2018.  Ireland’s first ever win against the All Blacks on home soil during the November internationals was ranked in top spot by a massive 40% of those surveyed.  Males aged 45 to 54 (55%) and males aged 18 to 24 (54%) were most impressed by the win.

Ireland’s Grand Slam win was a distant second behind the defeat of the All Blacks on 15% while our women’s hockey team finishing as runners up at the World Cup on 7% was third on the list.

Again, some regional variations do show up.  Limerick’s All-Ireland senior hurling championship win is ranked in third place on 11% by those in Munster.

Katie Taylor’s place in the hearts of the Irish public is once again highlighted.  She is the country’s Most Admired Sports Star with 19% of respondents ranking her at number one.  This is the fourth time in the last six years that she comes out on top in this category.

In what was a special year for Johnny Sexton, he takes second place on the list.  World Rugby’s Player of the Year was ranked most admired by 11% of respondents.

World Championship winning rowers the O’Donovan brothers (10%) were just behind with a gap then to Peter O’Mahony on 6% and Conor Murray and Joe Canning on 4%.

A rugby moment also comes out on top when the public were asked to decide upon the Most Memorable Moment in Irish Sport in 2018.  Jonny Sexton’s last gasp drop goal against France took an overall total of 31%.  The women’s hockey team’s win against Spain on penalties in the World Cup semi-final came in second here on 21%.

Interestingly however, those positions were reversed amongst females with the hockey shoot out drama on 26% and Sexton’s drop goal on 24%.  There was a similar pattern in Leinster (outside of Dublin) with 28% ranking the hockey moment above the rugby moment on 27%.

The Rugby World Cup is what has us most excited as a country for 2019.  26% of those surveyed give the tournament in Japan the nod as the sporting event they are most looking forward to.  The ever popular All-Ireland senior inter-county championships are next in line on 19% while the Six Nations on 11% is third just ahead of the Euro 2020 qualifiers on 10%. 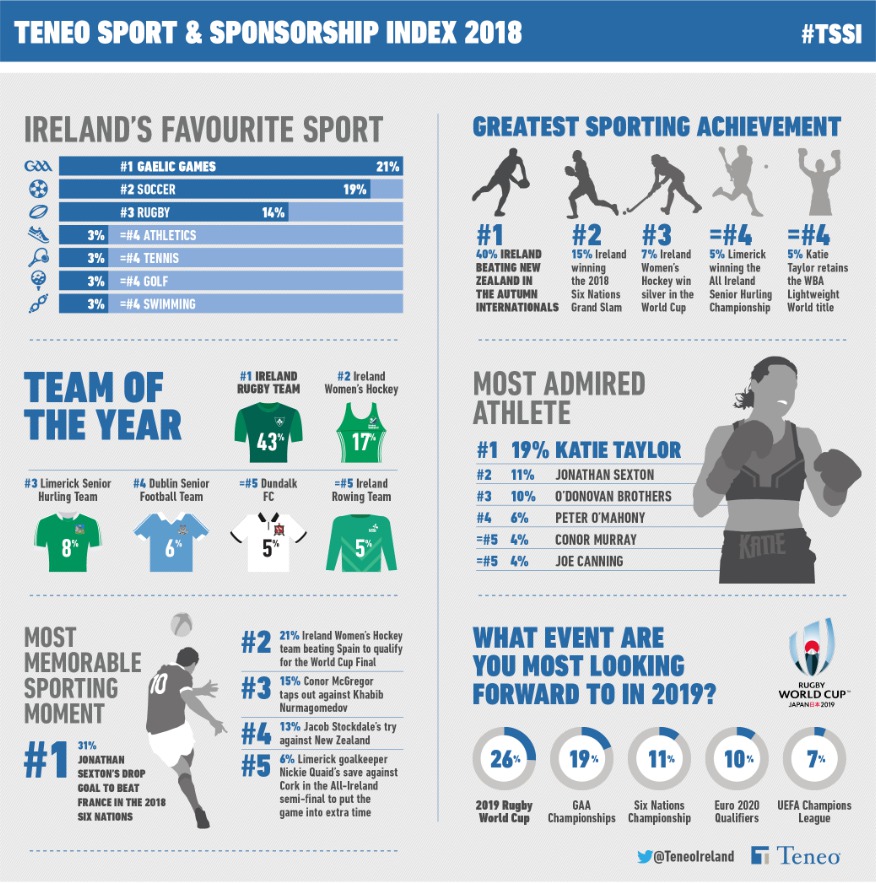 What was the greatest Irish sporting achievement of 2018?  (top 5 only)

What was the most memorable Irish sporting moment of 2018? (top 5 only)

Which of the following sports stars do you most admire? (top 10 only)

What is your favourite sport? (top 4 only)