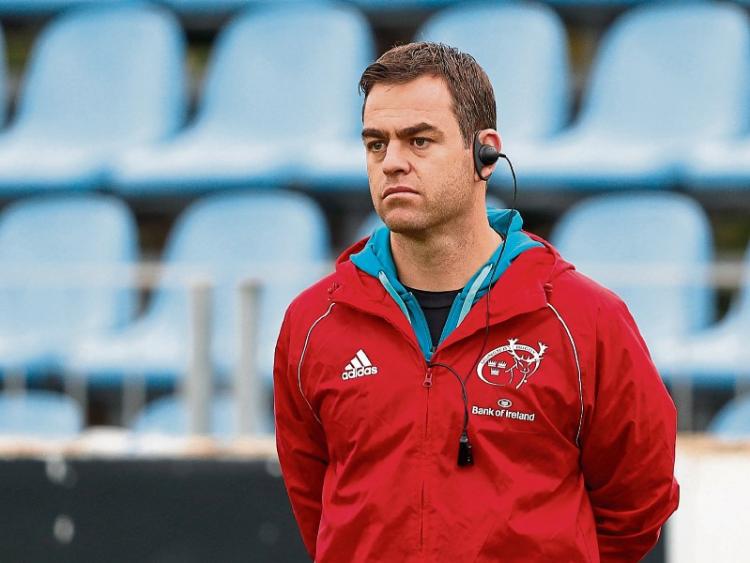 MUNSTER head coach Johann van Graan sais he was ‘proud of the way our players behaved on the field’ during the course of Saturday’s ill-tempered Heineken Champions League clash with Castres in France.

The 50-hour window for citing other incidents in the game passed on Monday without any additional punishments being revealed.

However, competition rules still allow this deadline may be extended in certain circumstances. EPCR may refer the complaint to a citing officer to determine whether it should proceed. The case will then proceed to a disciplinary hearing”.

Munster players were left angered by a number of incidents during the course of Saturday’s game which ended in a 13-12 win for the French champions.

Speaking at the province’s weekly press briefing at UL on Monday, Van Graan said: “Every game of rugby is different. Certain things happen in a game and I think the spirit of rugby is important, the values in the game. I’m proud of the way our players behaved on the field.

“There were certain obvious incidents that happened in the game and it was pretty evident for all to see.

“I’m a believer in this game, that is why I am in it. You play it to the best of your ability and we respect our opponents every single week. After the game, you look at what happened, learn and move on.

“You’ve got to adapt in the game, with certain incidents we didn’t adapt quick enough and that’s a learning from our side.

“Whether it is Pro14 or Europe, you follow due processes every single week. That’s why there is a citing commissioner, it goes to both teams after the game and we followed our normal process.”

Van Graan continued: “I didn’t have an issue with the yellow card (for Niall Scannell), the maul was going forward and it was pulled down.

“Castres conceded four penalties for the same infringement and the referee didn’t give them a yellow card or a warning, so we need some clarity on that.

“We had our chances to win the game in the backyard of the French champions and when you create so many of those chances. We spoke about it as a group this morning. I’m unhappy we didn’t win, but we got a bonus point which is huge in the context of the group.”