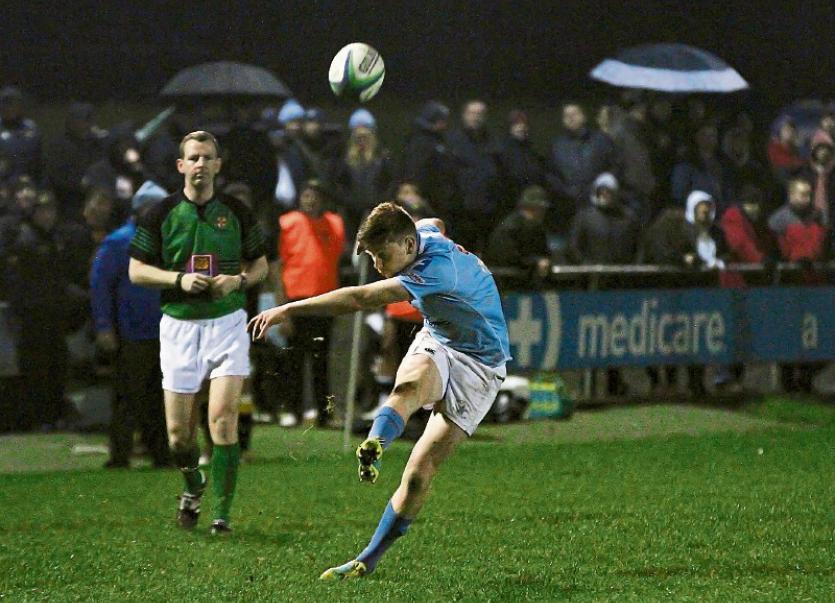 Healy, who skippered Glenstal Abbey to their historic first ever Munster Schools Senior Cup success last March, landed a superb last gasp penalty in the teeth of the storm to edge Garryowen to a nail-biting 14-12 win over UCC at the Mardyke.

Trailing 11-12 in the dying seconds of the game, Garryowen were awarded a penalty outside the students ‘22.  In a howling wind and driving rain, Healy needed to start his kick well outside the right hand upright and trust the gale force wind to bring it back.

Munster Academy starlet Healy judged the kick superbly as it sailed between the upright to seal a precious win for Conan Doyle’s charges.

The lead had changed hands no fewer than five times in a nip-and-tuck second half.

The Dooradoyle side’s fourth successive win in Division 1A has seen them move into the top four play-off places in the All-Ireland League at the mid-point in the regular season.

Fourth-placed Garryowen enjoy a four-point lead over fifth-placed Dublin University in the table as the league begins its Christmas and New Year’s break.

Garryowen will return to action in the AIL in the reverse fixture with UCC which takes place at Dooradoyle on Saturday, January 19.

Before then, Garryowen will take on Young Munster in the Limerick Charity Cup final at the Markets Field on Frday, December 28.

The ‘Light Blues’ face Cork Constitution in the Bank of Ireland Munster Senior Cup final at Thomond Park on Saturday, January 5, 2pm, while they will face Lansdowne in the Bateman Cup semi-final at Dooradoyle seven days later.