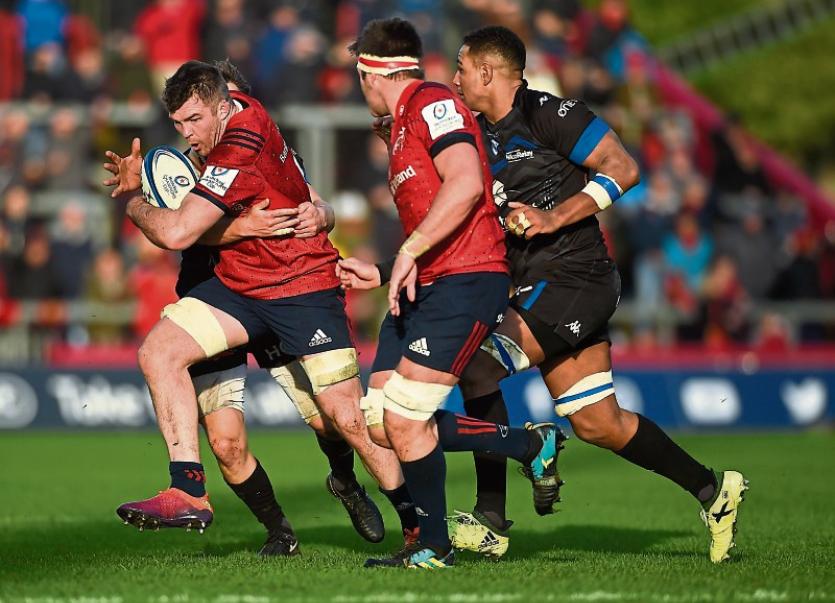 MUNSTER captain Peter O’Mahony says next Saturday’s return leg with Castres in France will be a ‘different animal’ to yesterday’s comfortable win for his side at Thomond Park.

Pool 2 table toppers Munster enjoy a three-point lead over second-placed Gloucester and a six-point advantage over Castres ahead of the second of their back-to-back meetings with the Top 14 holders.

Munster were fortunate to come away with a draw from their pool meeting with Castres at the Stade Pierre Fabre in France last season.

Munster and Castres renew rivalry in the second of their back-to-back pool fixtures at the Stade Pierre Fabre this Saturday, 5.30pm Irish time, live BT Sport.

O’Mahony said: “You could have a beautiful day in the South of France and it’s a different animal. We’ve done a lot of video on them this week, and that’s the nature of the back-to-back, you’ve a little less work to do and we’re lucky with the six-day turnaround.

“We don’t have as many days of training as we would normally have but you’ve done a bit of your work already.

“Neither of us are going to change the wheel for next week, so you’ve a bit of your work done but it’s just a different animal over there.”

Munster and Castres is the most played fixture in European Cup rugby as yesterday’s showdown was the 15th meeting between the sides.

O’Mahony agrees that the familiarity between the sides has brought incredible intensity in the meetings.

“We’ve played each other the most of any two teams in the competition and it’s always incredibly intense and heated and you’ve the cauldron over there that is Castres Rugby and we’ll be under no illusions that we’ll be going into a hostile environment.

“They’re the days that you look forward to though. You know, it’s the biggest test of all, the French Top14 champions in their backyard, it doesn’t get any bigger than that but we’ll be looking forward to it and we’ll certainly be very conscious of the test that’s coming.”

O’Mahony said out-half JJ Hanrahan had showed admirable big-game character to produce a Man of the Match display having been called in late on to replace the injured Joey Carbery.

O’Mahony said: “He’s made some big decisions in his career and he’s headed away from the place we all love and come back to us and he’s been unbelievable for us since he’s come back.

“He’s been asked to play in a couple of positions and it’s been difficult at times for him, but there’s a huge strength of character there and you see a guy who wasn’t in during the week step in and perform like that, it’s the biggest test of all to come in late like that. It’s a difficult thing to do, it’s a huge positive.”