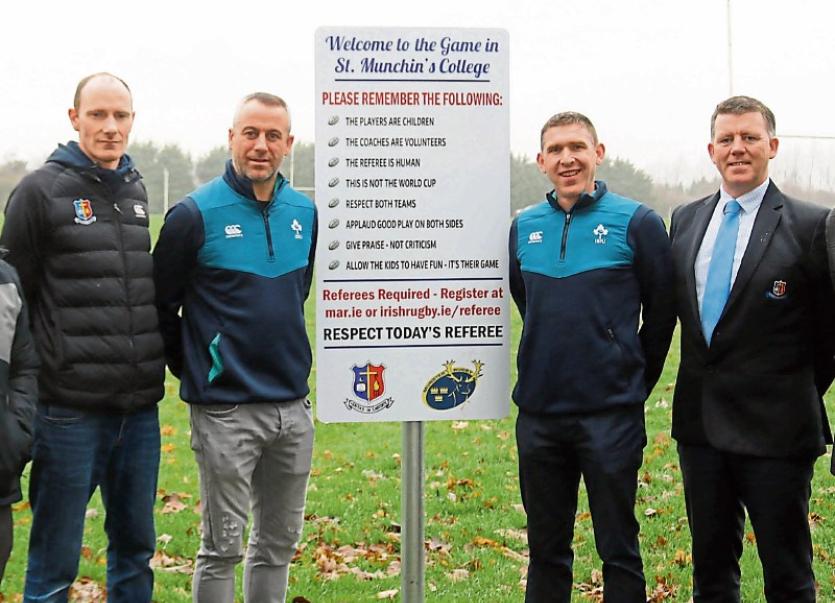 NEW signs have been erected on the edge of St Munchin’s College playing fields to encourage parents and supporters of school teams to respect players, the opposition and the referee.

The signs, erected by a combination of school management, players, parents, past pupils and coaches of the Corbally College highlight the need for observers to adhere to the qualities of, 'Welcome', 'respect', 'fun', 'applaud' and 'praise'.

St Munchin’s College principal, David Quilter explained: “The signs are reminders, refreshers of sorts, for us all.

“We don't want to leave behind our passion for sport but we can never lose sight of the respect we owe to our players, the opposition and of course the referee which is a defining quality of our sport.

“Bad sideline behavior is typically rooted in good intention, fueled by emotion, unsupported by education, and has a negative impact on the development environment we're trying to deliberately create here in St Munchin’s.

“I don't think any player, parent, coach or mentor wakes up on the morning of a game and sets out to ruin the game environment.

“They might wake up with a mixture of excitement and/or anxiety. They want the kids to do well. They hope for a positive outcome.

“However there is no doubt that negative sideline behaviour affects kids is really bad ways.

“Bad sideline behaviour, if not addressed will have a crushing effect on youth sports! It is distracting to players, detracting from their ability to play the game, and ultimately sucks the fun from the game.

“In St Munchin's, as in so many schools across the nation, we understand the value of sport in keeping teenagers level headed at a difficult but beautiful period in their life.

“In St Munchin’s College, we are only too aware that Rugby is a contact sport. Each game is a contest not to be lost. Every collision is a challenge, a medieval gauntlet thrown down and accepted.

“Every scrum, lineout and restart is a battle of wits – a game where inches are fought and scrapped, where the winning of a yard becomes a story to be told afterwards.

“In all this turmoil, non-rugby people are often struck by the measured response of all concerned.

“The man in the middle, the coach in the dugout and those applauding and critiquing on the sideline have as much a part to play as the warriors on the pitch in preserving the unique respect which is a hallmark of the game and something which other codes perennially admire and seek to emulate.”

* Meanwhile, a new members course for the Munster Association of Referees (MAR) will take place on January 13,  2019 in the Charleville Park Hotel. Interested parties should contact munsterreferee@gmail.com for more details or long onto www.munsterrugby.ie or www.mar.ie