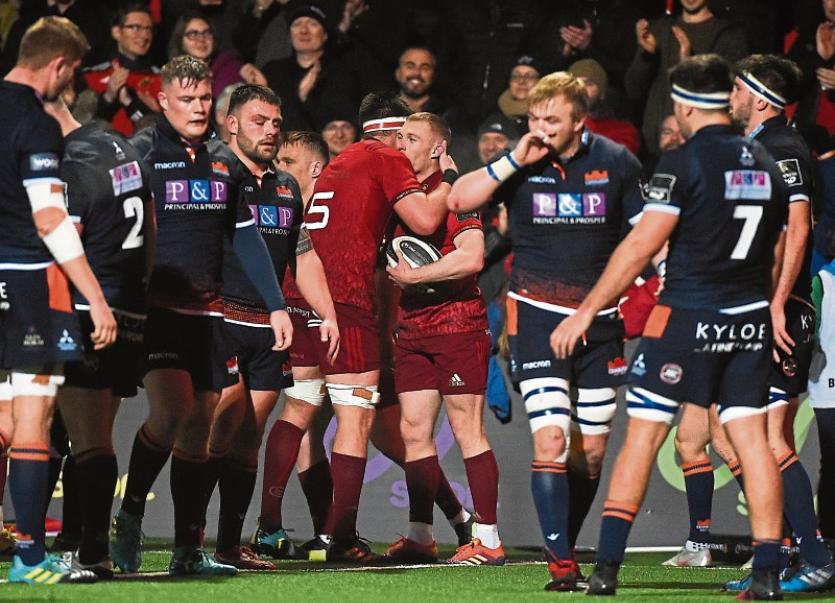 A SENSATIONAL first half hat-trick of tries inside eight minutes from Keith Earls helped Munster score a resounding 44-14 bonus point win over an understrength Edinburgh side at a sold-out Musgrave Park on Friday night.

Clinical Munster ran in eight tries in all to score their third successive bonus point win in the Guinness Pro14. The runaway success is a timely bonus for Johann van Graan’s side ahead of their back-to-back Champions Cup meeting with Castres Olympique, beginning with the home tie at Thomond Park on Sunday week.

While Earls caught the eye with his hat-trick, Man of the Match Chris Farrell bagged a brace as did Andrew Conway to bring his try tally to five in six days following his exploits for Ireland against the USA.

The game also saw vital gametime for both centre Farrell and his Ireland team mate Conor Murray who were making their first starts of the season for the province.

The home side put the game to bed in the opening half after which they led 34-7, scoring six tries.

After Chris Farrell began the scoring blitz with a fifth minute try, the in-form Andrew Conway dotted down twice in four minutes to help the home side into a commanding 19-0 lead after 20 minutes.

However, Munster, who had won their two previous outings in the PRO14 with bonus points, took complete control of the game before half-time.

The electric Earls showed a terrific turn of pace to score a quick-fire ha-trick of tries. JJ Hanrahan added two of six conversion attempts in that opening half for a commanding 27-point interval lead.

Unsurprisingly, given the one-sided nature of the scoreline, the third quarter failed to sparkle to the same degree with Edinburgh facing a damage limitation exercise in the second half.

Munster rung the changes on the hour mark.. Johann van Graan’s charges bagged their seventh try in the 63rd minute when replacement Bleyendaal scampered over, while fittingly Farrell, who started the try scoring for Munster ended it with the final try late on.

"I just feel fantastic to be out here"