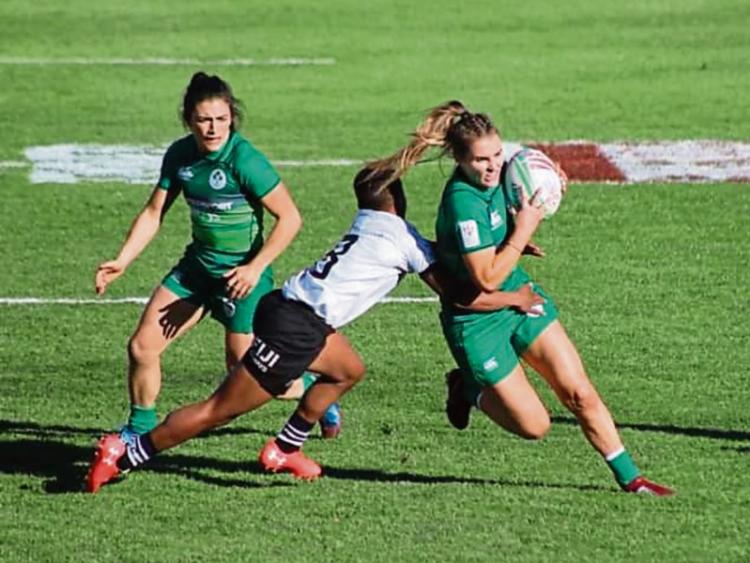 Aoife Doyle in action for Ireland 7s against Fiji

LIMERICK woman Aoife Doyle will jet out to Dubai this weekend, looking to boost her chances of competing in the 2020 Olympic Games in Japan.

Twenty three-year-old Doyle, from Merval Park in Clareview is a member of the Ireland Women’s 7s team which has set their sights on qualifying for the next Olympic Games in Tokyo.

As part of the qualification process, the Ireland 7s squad will compete in the second leg of the HSBC World Rugby Women's Sevens Series in Dubai later this month.

Shannon RFC player Doyle is one of 12 players who have been contracted under the Sevens Programme by the IRFU as the squad targets Olympic qualification.

The versatile Doyle won a Women’s 6 Nations Championship with Ireland in 2015 in the 15-a-side format of the game before concentrating her efforts on 7s rugby.

Aoife Doyle’s first taste of sport was playing camogie with her local GAA club Na Piarsaigh as a four-year-old. She did not take up rugby until some years later.

The past pupil of Salesian Primary School and Laurel Hill Secondary School recalled this week: “When I was about 12 I began playing rugby with Shannon RFC. I have been playing ever since.

“I had a few friends playing with Shannon at the time and they had a good under-age set-up, so I just joined them.

“I started out playing at full-back. Then, in my first year with Munster, I played centre and when I played senior with Ireland I was a winger then, but I have always played in the backs.

“When I hit my teenage years, a lot of my friends were giving up sport, a lot of them were leaving rugby, but I just knew I wanted to play it.

“In my second year playing with Munster, about four of us were brought into the Irish camp for a weekend to shadow the coach and look around.

“By then I knew if I kept going playing it, I could be there one day playing. Since I was about 16, I felt I could make it.

”I liked the physical side of the game, full contact. I love the physicality of sport, be it rugby or the camogie before that.

“I had been playing 7s at the same time as the 15-a-side game because the year I was playing with Munster they started at under-age 7s squad.

“We went to Sheffield that year. Three of us were brought up to the Ireland senior 7s squad. I was still in school, so every weekend I came up to DCU to train with the 7s squad.

“From that I got brought into the Ireland 15s squad. After I left school I moved up to Dublin for 7s and became contracted to them. It was then I left the 15-a-side game.”

The Limerick woman was thrilled to be one of a dozen players offered a full-time contract with the IRFU 7s programme this season.

“It was brilliant. There are 12 of us who are contracted. I suppose when I first started I never thought the sevens programme would get to where it is now, especially when I was so young as well.

“I am absolutely delighted to be able to say I am a full-time professional athlete now, signed to the IRFU. It's brilliant.

“We usually train four times a week, with Wednesday as our recovery day, we might have massage, or do an extra gym session or some rehab.

“We’re based on Lansdowne Road. We have a team house just next to the Aviva Stadium.

“We train Monday, Tuesday, Thursday, Friday. We start with a pitch session and have gym in the afternoon. On Thursday and Fridays we start at 9am and those would be our double pitch days, so we will have two sessions.

“We get every weekend off.”

On that weekend, the prolific Doyle scored crucial tries against France, Fiji, Russia and Australia in that agonising 21-19 defeat in the fifth-sixth place play-off..

This weekend the squad departs for Dubai for the second leg of the series.

Aoife Doyle said: “Colorado went well for us last month. It was probably the best start we have had to a season, so we are really looking to build on that. We were thrilled with top six.

“To qualify for the 2020 Olympics in Tokyo is our goal.

“We are flying out to Dubai on Saturday for the second leg of the 2018/19 HSBC World Rugby Women's Sevens Series which takes place the following weekend.

“Dubai is one of the legs held alongside the men's 7s event. When you play the same time as the men, it draws a massive crowd and has a really good atmosphere and for the first day we play on the main pitch. It is brilliant.

“For me the main difference in moving from the 15-a-side game to 7s is playing three games in a day as opposed to one.

“In 15-a-side you build yourself up for the 80 minutes, but in 7s your first game could be absolutely so hard and you're wrecked but in your head, you're thinking I have another game coming up in an hour. I found that hard to get used to coming from 15s.”