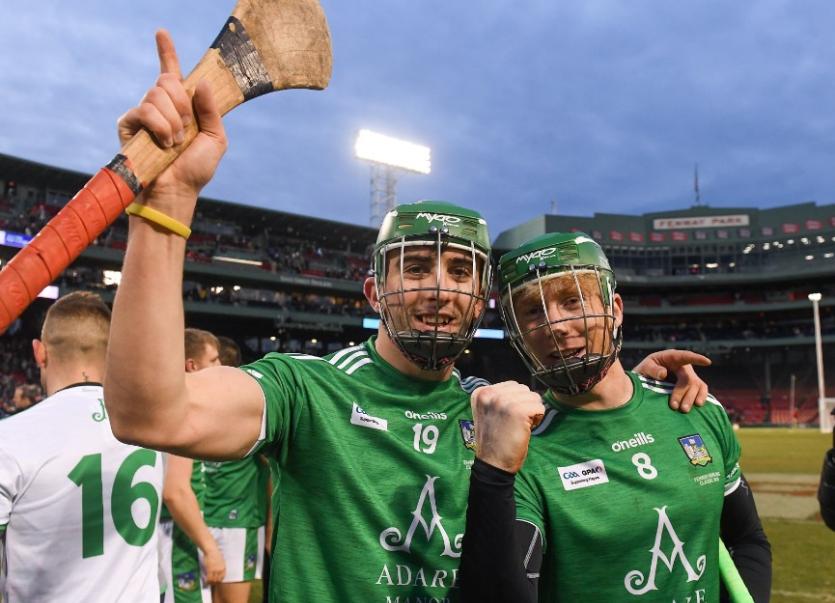 IN the famed home of baseball’s World Series champions, Boston Red Sox, the Limerick hurlers embellished their 2018 season with yet more silverware.

While the Fenway Classic in Boston won’t go down in memory, it’s yet more proof of the current standing of Limerick hurling.

A  2018 season that was kick-started with a Co-Op Superstores Munster League trophy in the Gaelic Grounds last January, and now the tail-end came in Fenway Park with an Aer Lingus Players’ Champions Cup win.

Both are mere extras to a season that will live long in the memory as the Liam MacCarthy Cup returned Shannonside after a 45 year wait.

So three pieces of silverware at the top table when Limerick collect their Celtic Cross medals in the Adare Manor on Sunday December 16.

And, that’s not to mention league promotion after seven failed attempts, and numerous other team honours and individual accolades.

All well earned by a 36-strong panel of players and a 23-strong backroom team.

And, the victory tour continues in the coming week – a Thursday November 22 Victory Banquet in the Red Cow Hotel, organised by Club Limerick Dublin and a Tuesday December 4 Night of Champions Seasons Finale discussion forum in the Woodlands House Hotel.

There is little immediate rest for the hurling heroes with confirmation that the 2019 season is to start on Friday December 14 with a Munster League game against Tipperary in the Gaelic Grounds. It’s a tie that was brought forward by agreement with both counties and comes just days after Limerick’s can officially begin training for the new season.

The remaining group game, away to Kerry, will be a mid-week fixture on return from the team holiday on January 7 – the final, which Limerick have reached for the last four years, is in the Munster Council fixture list for January 13.

The new season will begin in earnest on Sunday January 27 against Davy Fitzgerald’s Wexford in Innovate Wexford Park with the first big home game on Saturday February 2 when Tipperary come to the Gaelic Grounds for a flood-lit fixture.

Last Sunday Na Piarsaigh ended their 12-game unbeaten run in the Munster club SHC – suffering defeat in their bid to retain the provincial title against Ballygunner.

The one silver lining will be availability of the Na Piarsaigh players to bolster the Limerick panel ahead of a return to top flight league hurling for the first time since 2010.

John Kiely and his backroom team will be planning for the league without cruciate ligament injured Paul Browne and Richie McCarthy, while others like Darragh O’Donovan, Tom Condon and Willie O’Meara are currently on the treatment table and didn’t feature in Boston last weekend.