Limerick hurlers in Boston: They came, they saw, they conquered 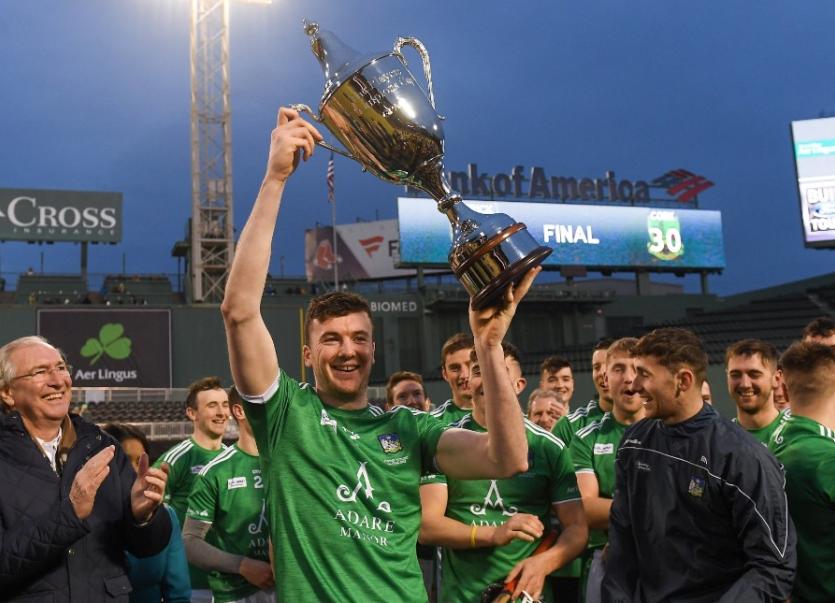 IN Boston’s Logan airport there is an impressive display of banners hanging from the high ceiling in celebration of the city’s sporting prowess.

Red Sox (baseball), Bruins (ice hockey), Patriots (American Football), and Celtics (basketball) all feature in a quick snapshot to capture the central role of sport in the life of the east coast city.

The Limerick hurlers felt instantly at home – a sporting city with a strong Irish connection.

Limerick arrived complete with the Liam MacCarthy Cup and departed with yet more silverware – the Players’ Champions Cup as Fenway Hurling Classic winners.

The collection of banners will soon see the addition of another Boston Red Sox flag after they won the World Series championship for a ninth time last month.

During the 2018 season, the Fenway Park side used ‘Do Damage’ as their slogan.

Limerick it appears are following suit.

“We are probably on a crest of a wave at the moment and we are not always going to be there, so we want to strike while the iron is hot and achieve as much as we can,” said Graeme Mulcahy after Limerick had beaten Wexford and Cork in the famed baseball grounds late on Sunday night, Irish time.

But all were quick to point out, that Limerick’s first hurling tour stateside, since 1974, was about more than just hurling.

From New York, to Boston, to Chicago, the Limerick ex-pat community came in their droves – supplemented along the way with travelling supporters aplenty from Ireland.

This was Limerick’s All-Ireland winning lap of honour moving across the Atlantic and the green and white clad support 3,000 miles away repeated scenes in every village across Limerick since August 19.

In all three cities, there were official events in the evenings and by day training sessions with the local GAA clubs bringing Limerick to the Gaelic Parks of New York and Chicago and the Irish Cultural Centre in Boston – red carpet welcomes in all, for John Kiely, his players, and the coved MacCarthy Cup.

There was even a pit-stop in the UN General Assembly in New York.

A smaller touring party of players, team officials and county board officials attended New York and Chicago, which were either side of the weekend’s main event in Boston.

It was a three night stay in Boston for Limerick, who brought a 25-man panel for the Fenway Classic – the first visit by the county side to the city since 1936.

First up on matchday for the men in green, who wore a specially commissioned one-off jersey, was a semi final with Wexford. Cork awaited the winner in the final after a late Patrick Horgan goal defeated Clare.

Limerick trailed 32, 25 at half time but Patrickswell duo Aaron Gillane and Diarmaid Byrnes struck late goals to book a final spot, in a competition won last year by Clare and by Galway in 2015.

Live across Ireland on TG4 and across the US on NESN, Limerick were crowned champions with a 38-30 final win over Cork.

Limerick had to play the final just a half hour after their semi final but it appeared to help the men in green settle quicker and they built a 21-0 lead. The Fenway Classic was played with two halves of 20-minutes and by half time, Limerick were 24-13 ahead.

The Super 11s format only allowed for goals and Barry Murphy and Tom Morrissey each hit two in that first half.

In the second half, Bill Cooper and Patrick Horgan found Cork goals but Cian Lynch and Andrew La Touche Cosgrave hit back to maintain the Limerick lead.