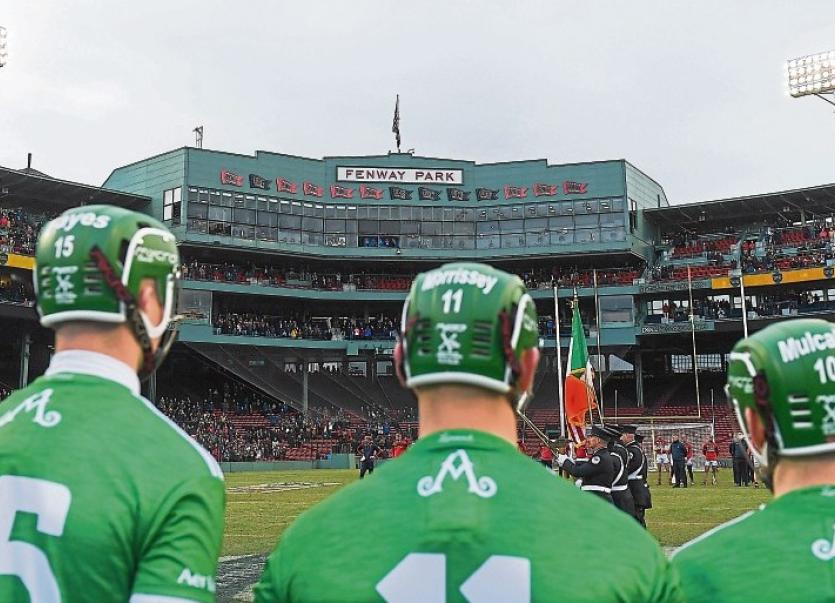 The All-Ireland winning heroes were back in celebration mode after adding the Players’ Champions Cup to their 2018 trophy collection.

The Fenway Classic isn’t a season-long target for any side, but when Limerick got the chance to play on the home ground of baseball’s World Series winner’s, the Boston Red Sox, they were keen to put their best foot forward,

“To be honest we enjoyed ourselves for the last couple of days but once we got to this morning and last night we were preparing for this game like it was an All-Ireland semi final and final - we took it very seriously on the day,” said Graeme Mulcahy.

“We are probably on a crest of a wave at the moment and we are not always going to be there so we want to strike while the iron is hot and achieve as much as we can,” stressed the Kilmallock man.

As he posed for a photograph with the famous Fenway Park stadium sign as the backdrop, the sense of occasion wasn’t lost on Mulcahy.

Limerick beat Wexford with a late scoring surge in the semi final and then maintained an early over Cork to win the final.

“We were lucky to get out of here with the cup but it’s great to add it to the cabinet this year. It was daylight robbery in the semi final but that’s the luck we have had all year - that’s down to never giving in and keep going to the final whistle,” he recalled.

“We had a quick turnaround compared to Cork but maybe that suited us that we didn’t have a chance to stiffen up because we were still free and that might have given us the early edge. We were flying for the first couple of minutes and they seemed cold so maybe it was an advantage having the game straight before it,” said Mulcahy.

In the semi final, it was late late goals from Patrickswell duo Diarmaid Byrnes and Aaron Gillane that booked a final spot.

“My one left a hole in the net!” smiled Byrnes.

“I was happy to get one. I was saying that in training that I wanted to get one. We were relentless there to come back,” he said.

“It’s nice to win it - you are coming out here and you want to win. It’s all down to competitive nature - the first night we met after the All-Ireland for training out in UL we were having a laugh and the first thing that John (Kiely) said was that we were going to enjoy this but ye are competitive people and once ye hit that pitch that will come out in ye,” recalled the LIT student.

“What a day - we have come to Boston and it’s great to be in this beautiful city and then come to Fenway Park. When you think of baseball, and I don’t know much about it, you think of Fenway Park and we are after playing in that pitch - it’s a historical moment for Limerick. Winning the All-Ireland after 45 years and then to come over and do this, it all fits in together beautifully,” he said with a broad smile.

Captain Declan Hannon paid tribute to the green and white support in the attendance of 12, 674.

“To see so many Limerick people this weekend has been great – they are fantastic supporters and are everywhere we go,” said the centre back.

“This is amazing and it’s been a brilliant year for Limerick,” said the Adare man.