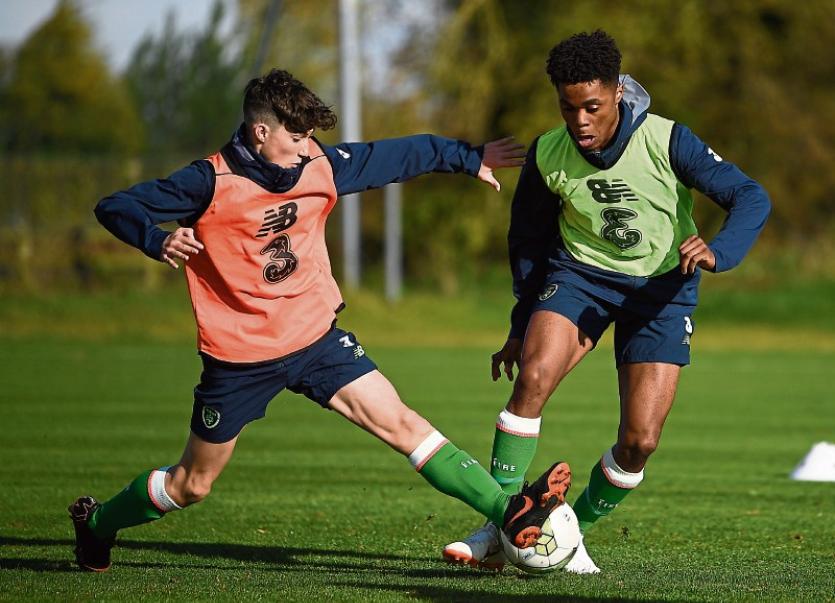 Limerick's John Ryan, left, played for the Republic of Ireland U-15s in Tuesday's 1-0 friendly win away to Poland

LIMERICK teenager John Ryan was introduced as a second half substitute in the Republic of Ireland U-15s impressive 1-0 friendly win away to Poland this Tuesday.

A Ben Quinn goal in the 25th minute proved to be enough for Jason Donohue's Republic of Ireland side, as the team were given their first taste of international football.

John Ryan, who lives in Castletroy, was sprung from the bench in the second half of the game which is the first of two fixtures the Republic of Ireland U-15s will play against Poland this week.

The second game takes place in the Polish town of Police this Thursday.

John Ryan, a third year students at Castletroy College, is a past pupil of Milford NS and Gaelscoil Castletroy.

In 2017, Ryan joined St Kevin’s Boys, of Dublin. At the start of this year he signed for Shamrock Rovers and currently plays with their Under 14 side in the Dublin and District Schoolboys League.

Head Coach Jason Donohue said he was delighted with how the Republic of Ireland U-15 players coped on their international debuts.

"We were outstanding in the first half. We dominated position and remained composed throughout dominating position.

"In the second half, Poland improved. They had some long-range shots, and not much more. The team were very resilient and I thought they were very calm under the Polish pressure."