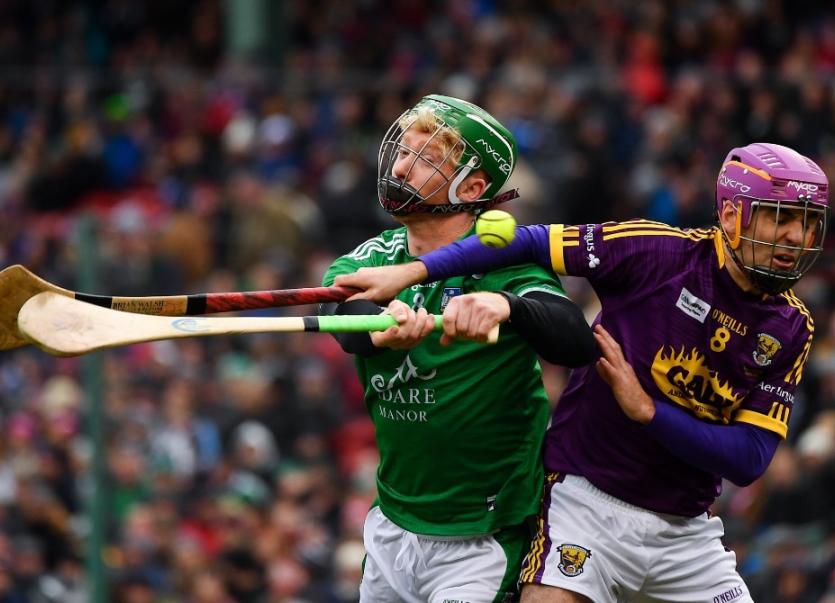 TWO late goals sealed Limerick's place in the final of the Fenway Classic in Boston this Sunday.

It finished Limerick 53, Wexford 45 in Fenway Park to seal a final spot against Cork.

Tom Morrissey and Graeme Mulcahy had early goals for Limerick but back came Davy Fitzgerald's Wexford to lead 13-6 aftr nine minutes of play.

Cian Lynch and Gearoid Hegarty then had Limerick goals but the men from Leinster were still 16-12 clear.

The lead was out to 24-12 when Limerick had a purple patch with Aaron Gillane, Graeme Mulcahy and Pat Ryan finding the net to lead 25-24.

But the men in maroon and gold finished with a flourish to lead by seven points at the break.

There was a red card for either side early in a second half that was abrasive at times. Pat Ryan also had a Limerick score in those opening exchanges but Wexford continued to lead.

Kyle Hayes, Pat Ryan and Cian Lynch all then found the net and Limerick were ahead; 43-42 with five minutes to play.

Harry Kehoe then looked to have won it for Wexford but Patrickswell duo Aaron Gillane and Diarmaid Byrnes struck injury time goals to book a final spot with Cork.

The Fenway Classic is played under the Super 11s format - 11-a-side with unlimited substitutions.

Under modified rules, there are no points but varying degress of goals - worth three or five points.

Limerick brought a 25-man panel to Boston for the exhibition tournament - the six Na Piarsaigh players missing from the All-Ireland winning panel, along with some injured stars.