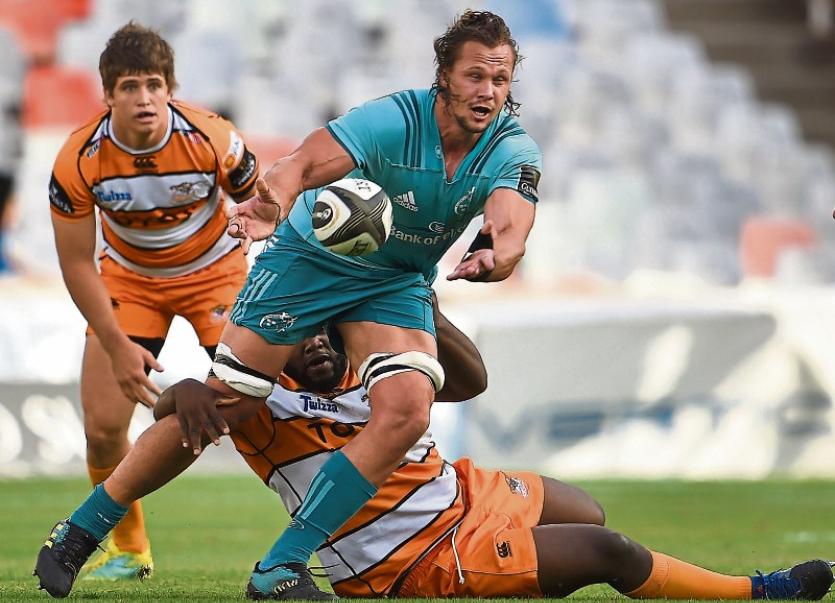 MUNSTER survived a strong second half rally from Cheetahs before recording their first away win in the Guinness PRO14 this season with an exciting 30-26 bonus point success at altitude at the Toyota Stadium, Bloemfontein on Sunday afternoon.

When Munster raced into a commanding 22-5 lead after 46 minutes. Johann van Graan’s side looked to be in for a comfortable afternoon.

However, the Cheetahs came roaring back scoring 21 unanswered points, including a bonus point try, to lead for the first time at 26-22 after 65 minutes.

To their credit, Munster showed admirable composure to wrench the initiative back from their hosts. A try from Mike Haley after 67 minutes handed Munster a bonus point and a 27-26 lead.

The Cheetahs pressed hard for a match-winning try in the closing minutes. However, the Munster defence held firm to claim a maximum five-point haul.

Munster, captained by the fit-again Tyler Bleyendaal at inside centre, went in front on 11 minutes when impressive out-half Bill Johnston kicked a penalty goal from just outside the Cheetahs ‘22. The 21-year-old Garryowen clubman had made four appearances off the bench for the province in the PRO14 this season.

Munster increased their lead 6 minutes later when the visitors struck for their opening try. Quick-thinking scrum-half Alby Mathewson took a quick tap penalty from deep inside the Cheetahs ‘22 and the rampaging number eight Arno Botha dotted down on his return to this native South Africa.

Fine move finished by Liam Coombes as Munster move into a 15 point lead.

Johnston was off target with the conversion attempt as Munster’s lead remained at 8-0.

It took a superb try-saving, cover tackle from winger Alex Wootton to prevent Cheetahs from making an instant reply as their speedy winger Rabz Maxwane powered deep inside the ‘22.

Munster suffered a blow in the 27th minute when flanker Chris Cloete was sin-binned and the home side took advantage of their numerical superiority as hooker Joseph Dweba dotted down off a well-executed maul to reduce the visitors lead to 8-5.

Crucially, Munster managed a second try before half-time to lead 15-5 at the break. The home side was penalised for pulling down a Munster maul. The visitors opted for a kick to the corner and from the resultant line-out and well-executed maul, hooker Kevin O’Byrne powered over the tryline.

Some excellent carries and a nice loop move involving hooker O’Byrne saw Johnston throw a terrific skip pass out to Garryowen winger Liam Coombes who touched down on his first start for Munster in the PRO14.

Johnston’s conversion made it 22-5 to Munster after 46 minutes.

However, Munster were caught napping from a line-out deep inside their own ‘22 in the 52nd minute as Cheetahs prop Ox Nche powered over. Ian Schoemann’s conversion made it 22-12.

Munster’s grip on the game was loosened further in the 59th minute when Shaun Venter powered through the Munster cover before flicking the ball back to hooker Dweba who powered over for his second try. Schoemann’s conversion cut Munster’s lead to three points, 19-22.

The South African side collected their bonus point try when off a counter attack full-back Rhyno Smith showed a clean pair of heels to the Munster defence before touching down. Schoemann’s conversion made it 26-22 to the Cheetahs.

Munster had conceded 21 unanswered points, However, the see-saw nature of the game continued when replacement out-half Ian Keatley sent Mike Haley over for the bonus point try and a 27-26 lead.

Munster’s defence then held firm as Cheetahs pressed for a match-winning try.