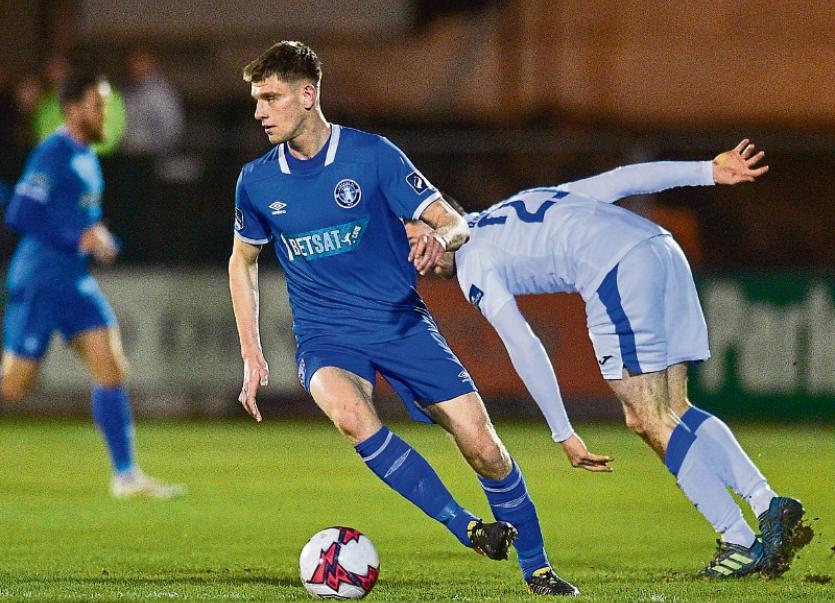 LIMERICK’S hopes of retaining their SSE Airtricity League Premier Division status for a third successive season ended in crushing disappointing as the Blues suffered a bitterly disappointing 3-0 aggregate defeat to Finn Harps before a bumper attendance of close on 3,000 at the Markets Field on Friday night.

Mark Timlin’s goal in first half stoppage time and an insurance goal from Nathan Boyle 10 minutes from full-time helped First Division runners-up Harps secure a deserved 2-0 win on the night, consigning Limerick to relegation for the second time in three seasons.

Relegation ended a hugely trying season for Limerick, both on and off the pitch, as a significant cut in the club’s playing budget resulted in several experienced first team players leaving the club during the summer transfer window.

While Limerick had a significant budget at their disposal in 2016 when relegated to the First Division, no such comfort blanket exists this time.

While Limerick had been hugely unfortunate to lose the first leg of this play-off in Ballybofey on Monday night, they were simply second best all through in Friday night’s return leg in Garryowen.

Tommy Barrett’s charges failed to score a single goal against their opponents in three hours of football.

That failing in front of goal haunted the Shannonsiders all season, who managed just 25 Premier Division goals in 36 games.

The concern for Limerick now is how long it will be before the Blues can extricate themselves from the First Division this time. Unless financial resources are secured in the short-term, the Blues

Kick-off was delayed by 10 minutes to allow the large number of supporters looking to attend the game access the match venue. How Limerick club bosses would have loved to have had that problem earlier in the season!

Limerick made two changes from the side which lost narrowly in Ballybofey with striker Danny Morrisey coming into the side in place of Karl O’Sullivan, while Jack Brady started in goals, replacing Tommy Holland who picked up an injured in the first leg.

After Harps had two players booked inside the opening 10 minutes. Limerick came closest to opening the scoring when Killian Brouder’s headed effort was deflected out for a corner which was eventually cleared to safety.

The visitors were dealt a blow three minutes later when their influential playmaker Paddy McCourt on his final appearance before retiring with an injury. Nicknamed the ‘Derry Pele’, 34-year-old McCourt played for Glasgow Celtic and was capped by Northern Ireland.

Limerick had a huge let-off after 20 minutes when Mark Timlin struck the home side’s upright after cutting in from the right. The ball was cleared out for a corner which came to nothing.

The Blues were again struggling to create much by way of a decent scoring opportunity.

Backed by a strong breeze, Harps looked the more energetic during that opening 20 minutes and after Danny Morrissey had flashed a fine effort over the cross bar on 38 minutes after latching onto a ball over the top, the visitors took the lead in first half stoppage time.

Mike Place played a delightful through ball for Timlin to race onto and he kept his composure to finish superbly past Jack Brady to guide the Ballybofey side into a 1-0 half-time lead.

The omens were not good for Limerick at the break as the when the Blues conceded first this season, they’ve secured just one draw, 1-1 v Shamrock Rovers in the regular season.

Harps lead was 2-0 on aggregate and as Limerick had managed just 10 goals in 18 home Premier Division fixtures this season, the Blues were facing an uphill battle.

Manager Tommy Barrett needed to change the formation in the second half in order to spark Limerick into life.

The home side began the second half in more promising fashion as Shane Tracy’s free-kick had the Harps ‘keeper flapping inside the penalty area, while Barry Maguire’s drive from inside the area flew narrowly side as Ellis tried desperately to get something on the ball.

The Blues came even closer to equalising on the night when Morrissey’s excellent shot from the edge of the box brought a smart save from Harps’ keeper Burke.

Limerick changed formation in a desperate bid to find the goal which would re-ingite their challenge, but as the Blues went chasing the game, Harps remained a threat on the break.

The visitors should have sealed their return with 25 minutes remaining, but Place fired over the crossbar from point blank range off, following excellent approach play from Timlin.

Harps put the issue beyond doubt in the 80th minute when Nathan Boyle stole in from the right and flashed the ball past Brady for 2-0.

Limerick’s sense of frustration was heightened soon after when Danny Morrissey’s header skimmed off the crossbar.

Limerick’s stay at the top flight of League of Ireland football is over. For how long it remains that way is anyone’s guess.