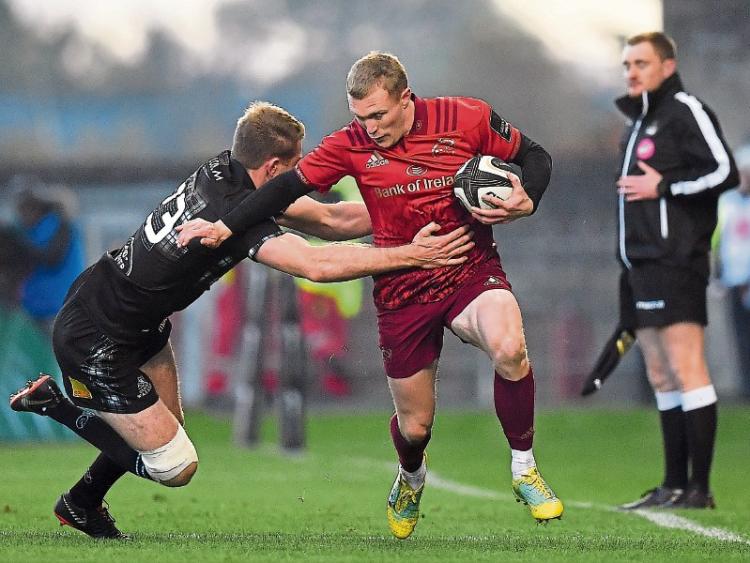 RORY Scannell’s sensational penalty goal from just inside the Glasgow half with the last kick of the game handed Munster a dramatic 25-24 win in their Guinness PRO14 clash at Thomond Park on Saturday night.

When Glasgow bagged their fourth try of the night to ease 24-10 in front after 60 minutes, a first Munster defeat in Limerick since Leinster prevailed at Thomond Park on St Stephen’s Day looked on the cards.

However, a previously outplayed Munster side rallied superbly in the final quarter from tries from Alex Wootton, Man of the Match Alby Mathewson and Scannell’s heroics with the boot late on steering the home side to an unlikely victory.

Munster’s unbeaten home run in all competitions now stretches to 13 games as the home supporters in an official attendance of 13,356 went home happy.

The Munster squad, minus their Irish stars, heads to South Africa on Monday for their next PRO14 fixture, a meeting with the Cheetahs at Toyota Stadium on Sunday next at 3.45pm Irish time.

The result sees Munster move back into contention in Conference A of the PRO14 after falling to fifth before the European break.

After a busy European period, a return to domestic action provided the players with another opportunity to sharpen up before the autumn internationals.

Munster were boosted by the return of wing Keith Earls, while Glasgow made eight chances to the side which beat Cardiff Blues in the Champions Cup – including a start for Horne.

The home side started quickly, playing at a ferocious pace – helped by a superb Earls break into the Warriors 22.

And that led to the first try of the match, with James Cronin powering over from close range with the help of John Ryan following some impressive work from the forwards.

But the Warriors hit back in style in the 24th minute. Opting to run from their own 22, Rory Hughes floated a superb pass out wide and that created space for their backs to run into.

Full-time highlights from a sensational game at Thomond Park as Munster seal victory with the last kick of the game. #GuinnessPRO14 pic.twitter.com/e1B4XkcBRi

A couple of neat passes later and Horne was away, sprinting for the corner and sliding in to score.

The scrum-half did it again before the break, Nick Grigg picking a clever line off the left to receive the ball and he burst through before slipping a pass  for Horne to run clear.

With just two defeats from their last eight matches against Irish provinces, the Warriors were noticeably confident and they scored a third try after the break – with Matt Fagerson picking up a loose ball off the back of a scrum and diving over.

JJ Hanrahan almost cut that gap with a scything run through the Warriors defence but he was held up just short.

The fly-half did reduce the deficit to three with a penalty following a scrum infringement but Glasgow brought up the bonus point in style as George Horne chipped ahead for brother Peter to touch down.

Munster got back into it when Wootton burst through to score in the corner, before scrum-half Mathewson threw a dummy pass and dived over from three metres out. Ian Keatley kicked the conversion to reduce the gap to two points.

And Scannell completed the comeback with a long-range penalty with the last kick of the game.

"These sort of matches you just have to grind out"