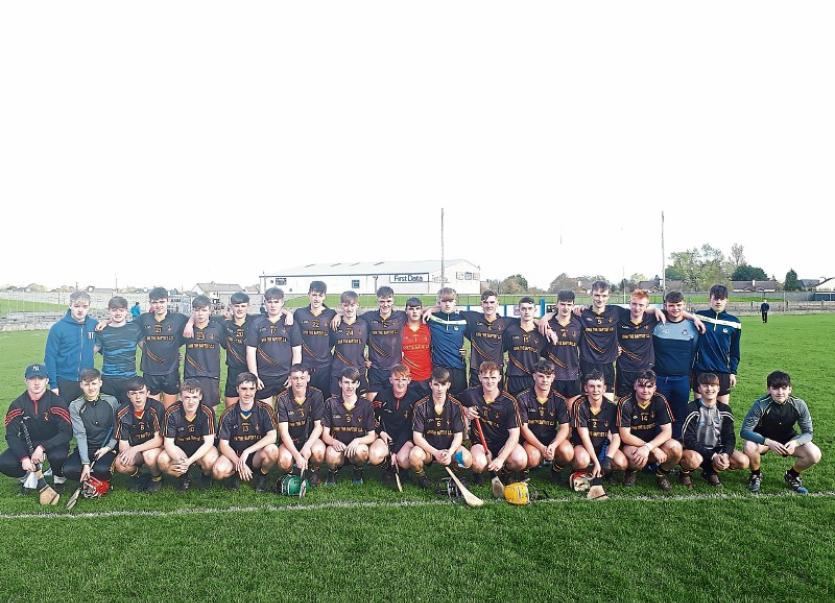 An impressive John the Baptist side led the 2017 Dr Harty Cup winners 2-8 to 1-7 at half-time, with their goals coming from Ryan Tobin, of Garryspillane, on seven minutes from Aidan O’Heney’s well-placed pass, while the impressive Dylan O’Shea, also of Garryspillane, rifled home the second goal on 18 minutes after being set up by midfielder and club mate Eoin O’Mahony.

Four points up at half-time, Hospital pulled clear in the second half on the scoreboard, led by their excellent centre half forward Brian O’Grady, of Kilteely-Dromkeen, who helped himself to seven points from play.

As John the Baptist are in a three-team group with the top two sides advancing to the quarter-finals of the Dr Harty Cup, the Hospital side have already one foot in the last eight. Their remaining group fixture will be against Blackwater Community School, of Waterford.

Dylan O'Shea top scored for the winners with a fine personal tally of 1-9, including six pointed frees and two '65s

On a perfect day for hurling. Hospital led 0-3 to 0-2 after five minutes, when Our Lady's struck for the game's opening goal as James Devanney set up Dean Lawlor who finished to the net from close range.

To their credit, Hospital rallied from the blow with corner forward Ryan Tobin racing onto a breaking ball before flashing the ball to the net.

The scored settled the Limerick students who also added a pointed free from O'Shea, before the same player had Hospital's second goal in the 18th minute for a 2-6 to 1-5 lead.

Further points from O'Heney, after he was picked out by a fine pass from Kevin Bonar, and an O'Shea free helped the winners into their four-point interval lead.

Tactically, Hospital were excellent in the second half, snuffing out Our Lady's scoring threat and, at the other end of the field, making the most of the majority of the scoring opportunities which came their way.

Two early points in the second half from Brian O'Grady and an O'Shea free helped the Limerick side pull further clear.

O'Grady's influence increased as the half moved on and he clipped some excellent points from play from difficult angles.

There was simply no way back for the Tipperary side as John the Baptist build up a 12-point lead at full-time with a significant 2-14 of their final tally coming from play.