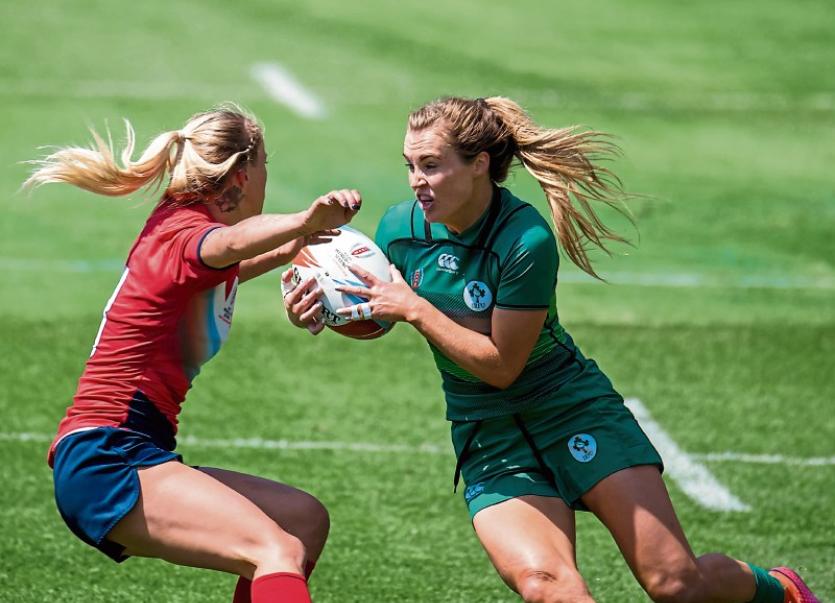 Limerick's Aoife Doyle, right, in action for Ireland against Russia in the Rugby World Cup Sevens Tournament in San Francisco this summer

LIMERICK woman Aoife Doyle has been included in the 13-strong Ireland Women’s 7s squad which competes in the opening round of the 2018-19 HSBC World Rugby Women’s Sevens Series in Glendale, Colorado, USA this weekend.

Twenty three-year-old Aoife Doyle, who is attached to Shannon RFC as well as Railway Union RFC, HAS been capped by Munster at U18, U19 and Senior levels. She has represented Ireland at U18 and Senior Sevens and was also capped as part of the winning Women's 6 Nations squad in the 15-a-side game.

The 2018-19 HSBC World Rugby Women’s Sevens series increases from five to six rounds this season, with the addition of this new opening round, which will be hosted at Infinity Park in Glendale. The following rounds take place in Dubai, Sydney, Kitakyushu, Langford and Paris.

Ireland are drawn in Pool C with Canada, Fiji and France, and get their tournament underway against France at 6.22pm (Irish time).

On confirmation of the squad, Director of Sevens Rugby, Anthony Eddy said;

“The players are looking forward to getting the new season of the World Series underway next weekend in Colorado.

“We continue to see steady improvement and depth in the squad and the more experienced players are well aware of the challenges that lie ahead.

“This is an important season for the team and the Colorado tournament will be a good challenge as we certainly have some tough opposition in our pool.

“The standard of all the teams on the series continues to improve, and with Canada, Fiji and France in our pool it means three big tests on Day 1.”

The tournament will be streamed live via World Rugby across their social platforms: www.youtube.com/irb , www.facebook.com/worldrugby7s