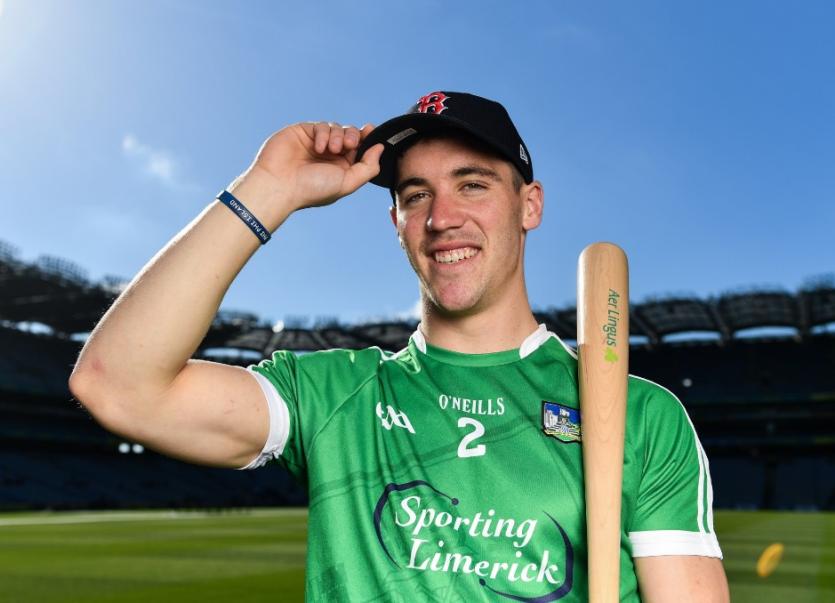 LIMERICK All-Ireland SHC winner Sean Finn swapped his hurley for a baseball bat this Thursday at the official launch of the Fenway Hurling Classic 2018, which will take place in Boston on November 18.

All-Ireland hurling champions Limerick will compete for the Players Champions Cup in a Super 11’s format tournament against reigning holders Clare and new contenders in Cork and Wexford.

The Fenway Hurling Classic will involve two semi-finals lasting 40 minutes with the winners proceeding to the final on the same day, Sunday November 18 - all three games to be broadcast live on TG4, GAAGO and NESN in the United States.

Corner back Sean Finn and coach Paul Kinnerk represented Limerick at the launch.

Super 11’s is an 11-aside format of hurling. The Fenway Hurling Classic 2018 is a joint initiative by the GAA and GPA to make it easier for the game to travel to pastures new and provide a forum for experimentation and development.  It was developed specifically by the GPA in conjunction with the GAA to allow hurling to be played in stadiums all over the world where the pitch size is smaller than a traditional hurling pitch.  This year’s event will mark the third time in four years that Super 11s has been played in the iconic Fenway Park, home to the Boston Red Sox.

The GAA and GPA are organising training sessions for players and referees in advance of the event to ensure that they are fully accustomed to the rules.

The event will begin at 12.30pm ET and it will feature an Irish festival complete with food, music and dancing. Over 30,000 attended the event in 2017 and tickets are now on sale at www.redsox.com/hurling

“Having experienced first hand the spectacle that is the Fenway Classic and the hugely entertaining game that is the Super 11s concept, I am pleased that we are returning to Boston with four of our top hurling teams, including All-Ireland champions Limerick and the defending champions from last year’s Fenway competition, Clare," said GAA President John Horan at the launch.

“I am also pleased to note the ongoing co-operation between the GAA and GPA in working together to organise the competition and bring some of the best traits of our great game to new audiences.”

"I am delighted that hurling is returning to Fenway Park. I experienced the games in 2017 as a spectator and found it a thoroughly enjoyable event. We feel proud to showcase the great game of hurling along with our outstanding players in one of the most iconic sports stadiums in the world," said Flynn.

Aer Lingus was unveiled as the official airline and partner.

“We are delighted to have been part of what has turned out to be a huge success story from the beginning and to help bring the country’s leading hurling talent to perform in Ireland’s second capital city – Boston! We have a strong and ever-growing number of routes connecting Ireland to North America with two new routes announced earlier this month, bringing to 15 the number of destinations on our North American network as we continue the largest ever transatlantic expansion in the airline’s history, building toward our aim of being the leading value carrier across the North Atlantic," said Aer Lingus Director of Communications, Ruth Ranson.