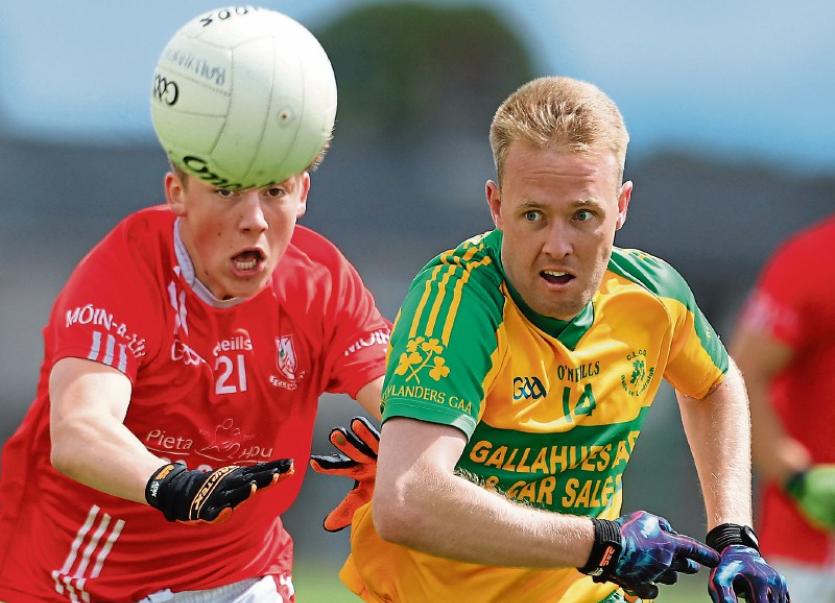 Monaleen and Ballylanders bid for spots in the final four

Ahead of the weekend, the bookies have Newcastle West as the favourites to lift the Fr Casey Cup on the weekend of October 20/21. The 2015 champions are priced up at 5/4.

The magpies are managed by Kerry native Martin Horgan, who was Limerick U-20 manager this season.

Champions Adare are second favourites at 6/4.

The remainder of the field are Monaleen (8/1), St Kierans and Ballylanders (both 10/1) and Ballysteen are seen as the outsiders at 14/1.

The first of the quarter finals is Monaleen and St Kierans – starting at 2.45.

It’s 2013 since these sides last met in the championship and Saturday’s encounter is also a repeat of the 2005 county final.

Indeed the men from west Limerick have three survivors from that defeat – McCarthy brothers Paudie and Johnny and Anthony Molyneaux.

St Kierans, who conceded just two goals in five group games, arrive in the knockout stages with four wins and just one defeat – a final round two point loss to Newcastle West.

Opponents Monaleen crept into the last six – knocking out St Senans by virtue of their victory over the Estuary men earlier in the championship. Monaleen’s return for five group games was two wins, two defeats and one draw.

The Castletroy side have former Clare goalkeeper Joe Hayes as part of their management team.

Managed by Andy Lacey, they have been without the injured Ger Collins in recent weeks. Still they have attacking options in Evan Quinlan, Brian Donovan and Brian Carson.

Also in their recent line-ups were Murroe-Boher brothers Darragh and Ross Kennedy. Shane Cusack, Daniel Enright and the experienced Finbarr Nash are other key men for the city side.

These sides met last year in the round robin phase and it was the south Limerick side that were 2-12 to 1-12 winners.

Inconsistency has been the dominant factor for both in recent seasons. Ballylanders were champions in 2014 but had to see off relegation trouble in 2016.

Last year it was Ballysteen that were in relegation trouble and had to beat Rathkeale to remain senior.

Appearing in a first quarter  final since 2015, Ballysteen found four goals in their winner-takes-all tie with Fr Caseys in the final round game. Pa Ranahan has returned from injury to offer experience to a side that will look towards Danny Neville, Mark Ranahan, James O’Meara and young guns Cillian Ferris and All Ireland SHC winner Willie O’Meara

Champions in 2014, Ballylanders are one of the more experienced panels with eight of their starting team from their 2007 title final still involved.

Ciaran Kelly and Eoin O’Mahony are among the fresh faces but Stephen Walsh, Kieran O’Callaghan, Stephen Fox and Shane Fox all remain central to success for a side that scored just one goal in five group games.

The Saints are nine years up senior while the Caherdavin side are four years up.