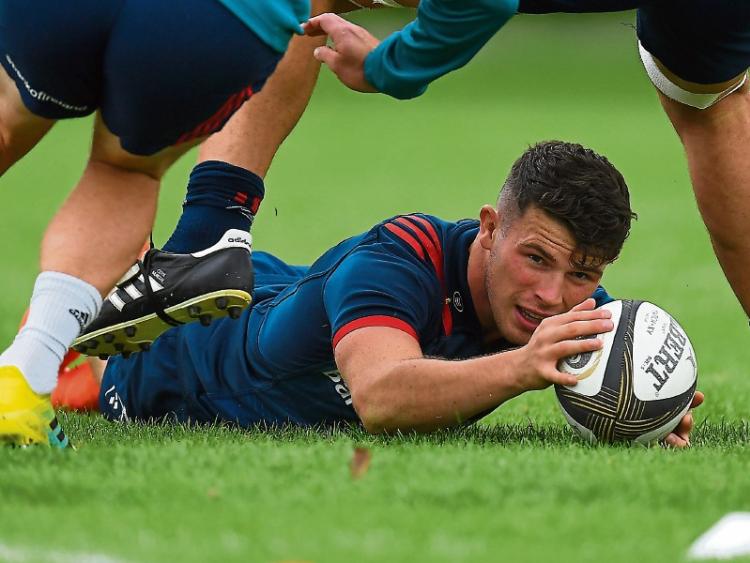 WHILE there was bitter disappointment for Munster’s senior side in Cardiff, the province’s A team made it three wins from three in the Celtic Cup when scoring an impressive 34-17 victory over the Dragons at Musgrave Park.

The first half saw tries for Munster A from captain Fineen Wycherley and Jeremy Loughman, with Ben Healy converting both. John Poland and Calvin Nash both crossed in the second forty on Friday night, with Healy kicking a conversion and two penalties, and Jake Flannery added the final conversion.

A late change for Munster saw Stephen Fitzgerald drop out of the squad, and the Academy’s Liam Coombes came straight in at full-back.

The visitors opened the scoring with a Jocob Botica penalty from 30 metres.

Scrum-half John Poland played his part in the lead up to the opening try when captain Fineen Wycherley crashed over for the first score.

Munster kept the pressure on and scored a superb individual try from Jeremy Loughman. Healy’s conversion gave the men in red a 14-3 lead.

However, the Welsh side reduced the gap before the break when centre Calvin Wellington touched down, with Botica’s simple conversion leaving it 14-10 at half-time.

Out-half Healy added the conversion and followed up with two long-range penalties to make it 27-10 with eight minutes to go.