WATCH: Munster suffer another dose of away day blues in Cardiff 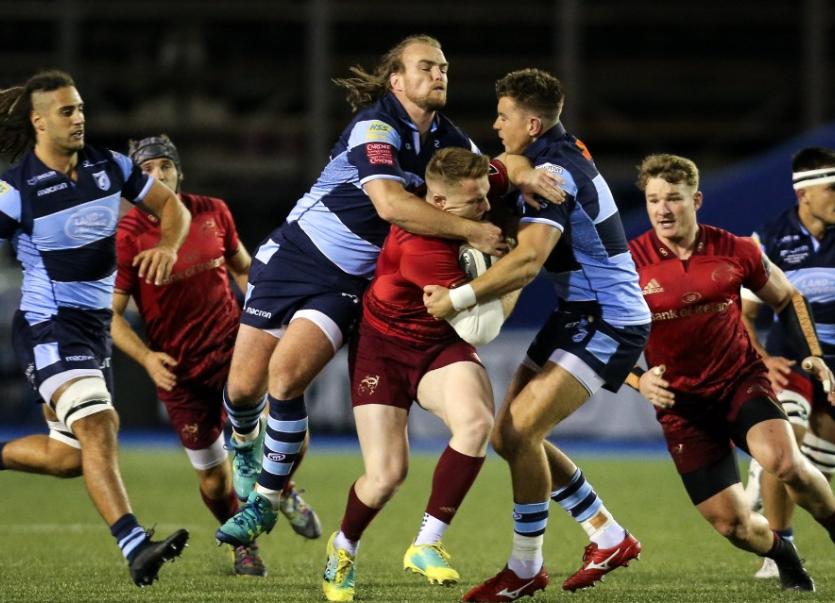 A DISAPPOINTING Munster side suffered their second successive crushing defeat on the road in the Guinness PRO14 this season when suffering a 37-13 thumping at the hands of the Cardiff Blues at the Arms Park on Friday night.

While Johann van Graan’s Munster have secured bonus point wins in their two home PRO14 fixtures this season, the province has now followed up on their heavy defeat away to Glasgow earlier this month with a 24-point hiding at the hands of a Cardiff side which was recording their first win of the campaign.

An outplayed Munster side was outscored by four tries to two by their impressive hosts with Tomos Williams scored two tries for the Welsh region, while Munster old boy Nick Williams and Willis Halaholo grabbed one apiece. Gareth Anscombe converted all four and added three penalties.

After capitulating last time out against Zebre, the Blues showed their grit and dominated Munster in attack and defence, earning a bonus point for their endeavour.

Nick Williams opened the scoring for Cardiff with a pick and go try under the posts  as Anscombe slotted the extras too.

Munster replied well though, with Carbery stealing the ball after Jason Harries lost it in contact and the ball making its way out to Andrew Conway, who blasted free, chipped to the try line and dived over.

The visitors then went ahead, with Carbery – after making a stunning break to take the visitors from one end to the other – set up Conway for his second in the same corner.

But the hosts hit back, with Lee-Lo making a searing break after a quick turn of pace and a lovely step to set up Tomos Williams under the posts, with Anscombe again converting.

Carbery added more points to close the gap to a point before the break with a penalty, but it was the Blues who came out fighting in the second half.

After a spell of pressure in Munster’s 22, Cardiff were rewarded as Anscombe whipped a cut-back to Halaholo in the corner for the centre to dot down for his own score to increase the hosts’ lead.

Anscombe slotted the conversion from the touchline, before adding another three from the tee to put Cardiff 11 points ahead.

All the action from Arms Park on a disappointing night for Munster as Cardiff Blues pick up their first win of the #GuinnessPRO14 season. #CBLvMUN #eirsportPRO14 pic.twitter.com/3NymyV3Dqo

Blues were not only clinical in attack but showed great physicality in defence, shutting out Munster on the hour mark as prop Stephen Archer was caught holding on to the ball just metres from the line.

The hosts cleared their lines, broke Munster’s defensive line and earned themselves a scrum and a resultant penalty to consolidate their lead – a real turning point in the game – to increase the gap to two converted tries.

Again the fly-half added another layer to the comfort blanket with a third penalty to put Cardiff 30-13 up with 10 minutes remaining, as the Munstermen cut frustrated figures.

The hosts tails were up in the final moments of the match with the knowledge of a first win and the Blues went searching for a bonus-point fourth try, eventually forcing their way through as Tomos Williams sniped from close range.

Munster return action in the Guinness PRO14 on Saturday, September 29 as Ulster arrive in Limerick for the first interprovincial of the season at Thomond Park (7.35pm).