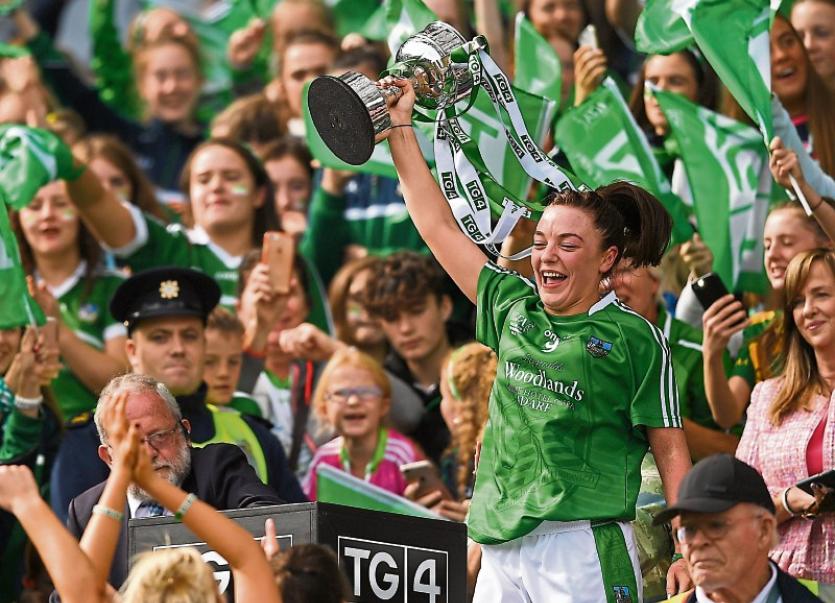 The success in Croke Park came exactly four weeks after the All Ireland hurling success.

The 5-6 to 0-8 ladies football final win over Louth, was just a second ever title for Limerick – adding to the 2010 success.

Captain Cathy Mee is one of the new generation – three years on the inter-county panel.

At the start of the year, the captain said that All Ireland honours was the furthest thing from their mind.

“Not at the start of the year. It’s been a really tough year, so up and down. No one gave us a chance going into today, which suited us fine. We knew ourselves that things were going really well for the last month or two and once we actually started to believe in ourselves things were going well and together we knew we were more than capable of winning today, outlined the Ballylanders star.

“The nerves were unbelievable beforehand but once we got out and once the game started you forget about all that. There were huge cheers going up whenever there was a score for Louth and Limerick and that’s brilliant to hear and gives you a real buzz out on the field and I’m just so happy to have played here and then to come out on the winning side,” she explained.

Last Sunday, she followed in the footsteps of 2010 winning captain Sandra Larkin.

“I tried not to think about it to be honest. I have thought too much about games before and we have lost and they would be games were we were favourites so I learned a long time ago not to take anything for granted and just focus on getting ready for the game and putting in a performance,” explained the wing back.

“There were nerves in the first few minutes and we had a few wides and maybe that was always going to happen because it was a big occasion - it was the same in the last match (London semi final) but we took over a bit earlier this time. We tried to keep possession and not try to force going for scores too much because they were quite defensive,” she recalled, referencing how Limerick had to wait until the 14th minute for their first score.

Then three goals in five minutes put Limerick in the driving seat and the John Ryan managed side never looked back – leading 3-2 to 0-1 at half time.

While the Limerick attack gained many plaudits for their superb goals, the captain was quick to point to a strong defensive foundation.

“Louth have unbelievable forwards and they did attack in that first half but the amount of us that got back, meant they couldn’t get through on goal and that was the main thing we focused on earlier in the year - stop conceding goals,” said Mee.

Limerick were relegated from the intermediate ranks last season and a new management was put in place last December and the captain was full of praise for manager John Ryan, coach Jim Moran and the backroom team.

“With new management coming in they had a strict gameplan and it took a while to buy into it but once we did it properly, we did it in bits and drabs throughout the year, we knew it was working.”

She added: “We knew it would be hard for a team to be fitter than us”.

Limerick lost twice to Louth in the league and the league semi final, but turned the tables to win All Ireland honours.

“I don’t know if we actually learned that much from playing Louth but over the last few months the training for the championship has been good and our fitness has told.”