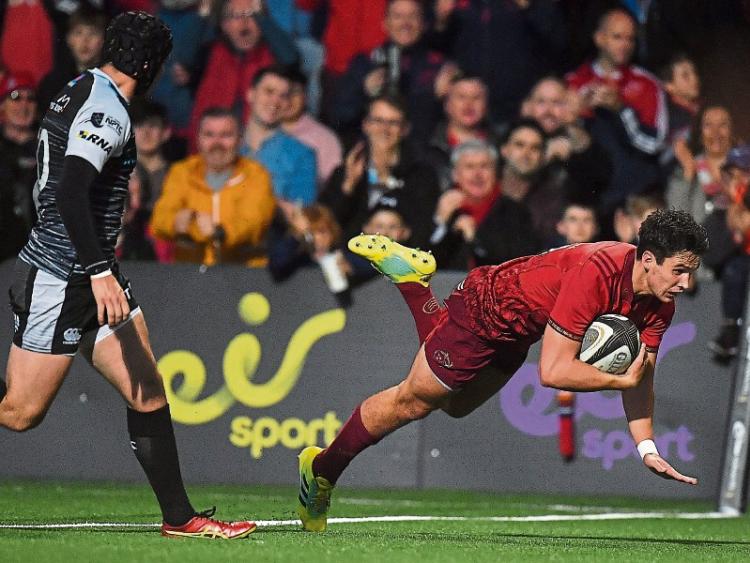 MUNSTER ran in seven tries in thumping an understrength Ospreys side 49-13 in their Guinness Pro14 clash before a sell-out attendance of 8,008 at Musgrave Park on Friday night.

The clinical Munster display was an impressive response to the lacklustre showing away to Glasgow in Scotstoun just a week earlier.

Munster, who have now lost just one of their last nine fixtures with the Ospreys, laid the foundation for this win in the opening half when the home side bagged the try bonus point.

A 16th minute penalty try after Ospreys deliberately collapsed a maul in the 16th minute set Munster on their way.

Out-half Joey Carbery, on his first competitive start, scored a sublime second try for the home side in the 21st minute when showing a terrific turn of pace and great feet to leave several Ospreys defenders trailing in his wake.

Prop James Cronin and hooker Rhys Marhall also dotted down for the 1/33 shots with the bookies to lead 28-6 at half-time.

A second Marshall try after the break was followed by further tries from Arno Botha and finally winger Darren Sweetnam in the 63rd minute.

The one down side for Munster was unfortunate injuries to starting tighthead prop Stephen Archer and his replacement John Ryan which saw scrums go uncontested late on.

Full-time highlights from Irish Independent Park as Munster eased their way to an impressive 49-13 win over theOspreys in the #GuinnessPRO14.#eirsportPRO14 #MUNvOSP pic.twitter.com/KLbvcknc7Z

Man of the Match Chris Cloete made a welcome return in the back row with the South African flanker out of action since February due to forearm and groin injuries.

Ospreys boss Allen Clarke made 12 changes to the team that saw off the Cheetahs 46-14 in Swansea last weekend, with captain Justin Tipuric, Alun Wyn Jones, Aled Davies and leading try scorer George North among those rested.

Friday night’s game Munster's first competitive fixture on the new modified 3G surface at Musgrave Park. The official opening of the new pitch by Tánaiste and Minister for Foreign Affairs and Trade, Simon Coveney, took place ahead of the game.

Johann van Graan joined our panel after the game to look back on his side's impressive win. #GuinnessPRO14 #MUNvOSP pic.twitter.com/k2mMh5ctGz