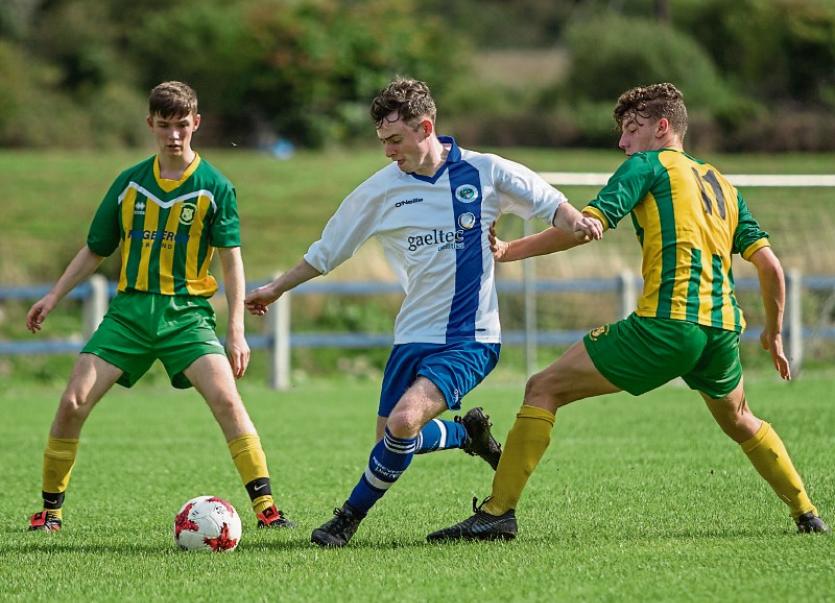 There were no surprises in the Premier Division on the opening day of the season.

Rathkeale, Champions two seasons ago and beaten in a play-off by Abbeyfeale United last season, opened their campaign with a resounding 6-1 victory away to Carrig Celtic, for whom Seanie King opened the scoring in the fifth minute. Gary Enright, Man of the Match in last season’s Desmond Cup Final, had Rathkeale level at half-time. The visitors took over in the second-half, with unanswered goals from Enright, Declan Nash (2), Patrick Wilmott and Pa Ahern.

The other amalgamated team, Killeaney/Bally Rovers, put up a good show in going down 3-2 at home to Broadford United. Their goals were scored by Tommy Griffin and Paul Brouder (penalty), with Liam O’Shaughnessy, Micheal Brosnan and Darren Murphy on the mark for the visitors.

Glin Rovers continued the sequence of away victories by winning 5-2 in Kildimo United. They took the lead with an own goal and Ollie Wallace put them 2-0 up inside opening quarter. Dara Deegan pulled a goal back but Cian Culhane restored Glin’s two-goal advantage from the restart. Deegan reduced the deficit again with a disputed goal. Glin pulled away in the second-half with a brace from Darren Sheehan.

The two promoted teams, Rathkeale B and Shountrade, both got off to winning starts in Division 1. Rathkeale won 4-2 away to Ballysteen, for whom Ger Garvey scored a brace.

Shountrade won 5-3 away to Feenagh, for whom Maurice Fitzgibbon opened the scoring. Shountrade led 2-1 at the break and Luke Ryan equalised early in the second-half. Feenagh’s other goal was a late consolation from Shane Ryan. The Shountrade scorers were Shane Reynolds (2), Cormac O’Shea, Ryan McCarthy and goalkeeper Donal Lenihan with a deflected clearance.

Things didn’t go as well for the teams relegated from the Premier Division. Shannonside did manage a 2-2 draw away to Newcastle West Town Reserves, whose goals were scored by Charlie Power and Brendan Guiry, but Athea went down to a 3-2 defeat at home to Adare United, despite taking a 2-0 lead through Listowel man, Darren Murphy. Adare began the comeback in the 70th minute, equalised in the 87th minute and scored the winner in injury-time.

AK United were the only side in the Division to keep a clean sheet so Alan Ryan’s goal midway through the first-half was enough to take all three points.

The most extraordinary game of the day took place in Division 2, with Pallaskenry coming from 6-3 down in the 80th minute to draw 6-6 at home to Creeves Celtic. The first-half was action-packed enough with Tom Shanahan and Seamus Mangan (2) giving Creeves a 3-2 lead at half-time. The Pallaskenry first-half goals were scored by Sean Doyle and Kevin Madden from the penalty spot. Creeves then looked to have pulled away for an easy victory when Richard Hayes made it 4-2 in the 48th minute and Mangan completed his hat-trick in the 55th minute. Alan O’Donnell pulled a goal back from a free-kick in the 70th minute but Hayes restored Creeves’ three-goal advantage five minutes later. Then the memorable comeback began. James Pomeroy gave Pallaskenry hope in the 80th minute, Evan Kelly put the game in the melting pot in the 86th minute and Kelly then scored the dramatic equaliser in injury-time.

Glantine also managed to score six goals but they kept a clean sheet in doing so. The players on the mark were Shane Kelliher (2), Brian Sheehan, Alan Doody, Chris Scannell and Conor O’Leary.

Paul Fitzmaurice and Damien Breen were the scorers for St. Ita’s in their 2-1 victory at home to Ferry Rangers.

Killeaney/Bally Rovers Reserves won 3-2 away to Newcastle West Town B, whose goals were scored by Tony Doyle and Sean Normoyle.

One goal was enough for Knockaderry to win at home to Abbeyfeale United B, scored by John O’Sullivan in the 75th minute.

Goals from Kevin Guinea, Dylan Moloney and AJ Maune secured a 3-2 victory for Askeaton at home to Newcastle West Town.

Gavin Cotter (2), MJ Purtill and Josh Lynch-Raftery accounted for Granagh United’s goals in their 4-1 win at home to Carrig Celtic.

Breska Rovers won 4-2 away to Mountcollis, whose goals were scored by Sean Lane and Micah O’Connell.

Dylan Warrilow and Danny Stack scored the Ferry Rangers goals in their 2-2 daw away to St. Ita’s.

The first Weekly Award of the season goes to Pallaskenry for coming from 6-3 down in the 80th minute to draw 6-6 at home to Creeves Celtic in Division 2. Pallaskenry will go into a draw with the other Weekly winners for a €100 voucher from Adrenalin Sport of Abbeyfeale and Newcastle West at the end of the season.