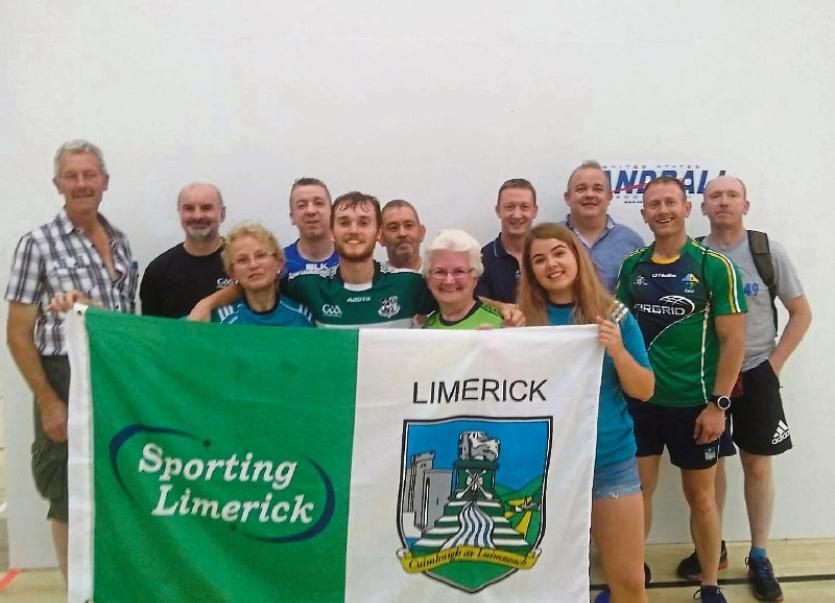 Hospital Handball Club members in the US for the world championships

Overall the team brought home eight medals from this year’s world handball championships – including two gold medals and six silver medals which is an increase of two medals from the previous world championship.

There will be a homecoming for our travelling players in the coming weeks.

First up on court was Paudi Quish in the 23&U Wallball competition.

Paudi went into this grade ranked number one in the world with his recent successes on the European handball tour. Quish made quick work of his first game and continued this success win a nail-biting win in the semi-final by overcoming a tough opponent in an 11-7 tiebreaker.

Paudi was in flying form in the final when he outclassed his opponent on a 21-12, 21-11 score line to bring home the clubs first wallball world title since Berni Hennessy in 2012.

Paudi then turned his attention to the Men’s Open doubles event where he teamed up with Irish national champion Conor McElduff.

They quickly dispatched of their highly favoured American opponents and set up a crowd gathering final against the USA. After a tough tactical final game our lads were unlucky not to claim the gold medal with an 11-7 tiebreaker loss.

The duo got off to a great start in their semi-final by taking the first game 21-16 but found it tough to keep their American opponents at bay and lost in a nail-biting 11-8 tie breaker.

Paul Hedderman then turned his focus to the 40x20 code where he played both the Men’s A singles and doubles.

Paul was very successful in both grades but the highlight was reaching the doubles final with his partner Daniel Hayes of Cashel.

They met a tough pairing in the final and were unlucky not to take the gold medal when they lost on a 21-16 21-17 score line.

Paul Herr also played the 40x20 event where he teamed up with both John ‘Chalkie’ Ryan and Kieran Burke.

Herr and Ryan were narrowly beaten by the eventual winners of their grade.

Burke had a really successful tournament by claiming the world silver medal in the doubles event.

Chalkie teamed up with Brett Broxey of the US and were narrowly beaten in the quarter finals.

Hospital born Paddy Donovan also brought some silverware back to our club.

Paddy played fantastic handball over the course of the two weeks and managed to claim one gold and one silver medal.

In the one wall event Paddy beat hot favourite Robbie McCarthy Senior in the semi-final before playing an extremely skilful Ecuadorian player in the final. Donovan held his own for a number of points however the traditional one wall style of his opponent proved to be too high a hurdle for our man.

Paddy turned his focus to the 40x20 grade later in the week and managed to take the gold medal in his grade by beating his doubles partner Tomás Donegan in the final. Donegan, Galbally native, has been an honorary member of Hospital handball club for a number of years and was unfortunate not to claim a gold medal in a close tie-breaker finish.

Donegan and Donovan teamed up later in the week for the doubles event and pushed their American opponents to the pin of their collar in the quarter finals.

The pair also made the journey to take part in the world championships.

John Paul was the only member of our team that played the wallball small ball event and was faced with the task of taking down one of the world’s best players, James Doyle of Armagh, in the semi-final. John Paul took the first game in emphatic style and was unfortunate not to win the second game. In the tiebreaker John Paul showed great heart and determination however he was narrowly defeated 11-9.

John Paul then turned his focus to the 40x20 code where he reached the semi final of both grades that he entered.

Mike O’Connor was also unfortunate not to take home a medal as he reached the semi final of his grade with Pat Murphy his partner from Broadford, Limerick.