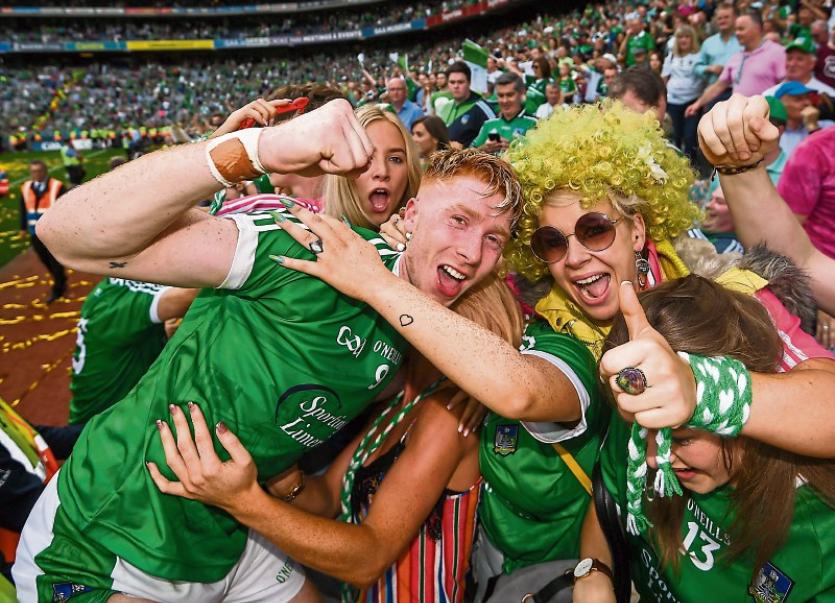 Cian Lynch celebrates with supporters in the Hogan Stand

Then bang! His mother Valerie arrives after evading the Croke Park stewards to race from the Hogan Stand.

“The minute the whistle went, I was kind of overwhelmed. Even trying to get your breath, sure lads would hop the old fence, my own mother hopped the old fence too. There's stewards still looking for her. She jumped on top of me and that's when I kind of gathered it. I took a deep breath and I realised, we actually got over the line,” recalled Lynch.

He added: “The last 10 minutes there was crazy. You're going from eight or nine points up to only being a point up”.

Back in March Limerick secured Allianz League promotion with a win over Galway in Salthill, leading to wild celebrations to signal a return to the top flight after an eight year absence. On that occasion, Cian’s mother was again first onto the field but most would have thought the Croke Park stewards would put an end to her pitch invasions.

“She did. She hopped the fence there, I don't know how she did. Valerie now, where there's a will, there's a way with us. I just turned around, she grabbed me, I put my head on her shoulders,” said Lynch.

“I don't know how she was still on the pitch. I was waiting for someone to rugby tackle her to the ground. It shows what it means to family, friends and the people close to you.”

He added: “Even walking around after the game, seeing people crying in the crowd. 45 years is a long time and for Limerick being such a sporting county, being such a hurling county, to see the pride that it's after bringing back”.

Lynch has won Harty Cup, Fitzgibbon Cup, All Ireland U-21, Munster minor and Limerick SHC titles in the last few years but Sunday topped all.

He explained: “when I was younger, myself, my brother and my father used to go to All-Ireland finals. We'd come here (Citywest Hotel) after for the homecomings, whoever it may be, if it was Kilkenny. I remember we used to be standing at the door, see Henry Shefflin or DJ Carey walk in the door. You dream of being that person walking in and Limerick crowd, family and friends walking you in”.

”Even driving in on the bus last (Sunday) night, I don't know I kind of got that feeling, when I was looking down at kids and thinking when I was their age, I was looking at my heroes coming in, walking into the Citywest Hotel, it just puts it all into perspective. We actually got over the line and got the monkey off the back.”

Four years ago Limerick lost the All Ireland minor final with Lynch, Sean Finn, Seamus Flanagan and Tom Morrissey from that team all in the historic line-up on Sunday.

”It's hard to believe, you know. After losing the minor final, you kind of say to yourself will we ever get back. 2015 and last year now with the U-21s has kind of brought the bit of hope and belief back with Limerick people itself and with the players and the group.”

Four years on the senior panel, Lynch was quick to point to the input of John Kiely.

“John has it set in stone, we're as good as if not better than a lot of teams in the country. It's about keeping that belief and getting over yesterday and getting over that hurdle that's been in our way for a long time. It's after opening a lot of valves and lot of airwaves for a lot of people, which is huge. The things is now I know this is great, we'll enjoy this but the next few years staying up the top and keeping Limerick hurling where it needs to be.”

Lynch and Co are the new breathe but Seamus Hickey, Richie McCarthy and Tom Condon are the experienced trio.

“In fairness to those boys, they've actually, I remember I was on it four years ago and there was only myself and Tom Morrissey, the only two 18-year-olds in at the time. The next oldest person I think was David Reidy so there was an old three or four year gap between us. I remember the older lads like Tom Condon, even Donal O'Grady, Wayne Mac, Seamus Hickey, Paul Browne kind of welcomed us in. Even to this day if they're not playing, if they don't make the panels, they're there and put the arm on the shoulder and give us words of advice.”