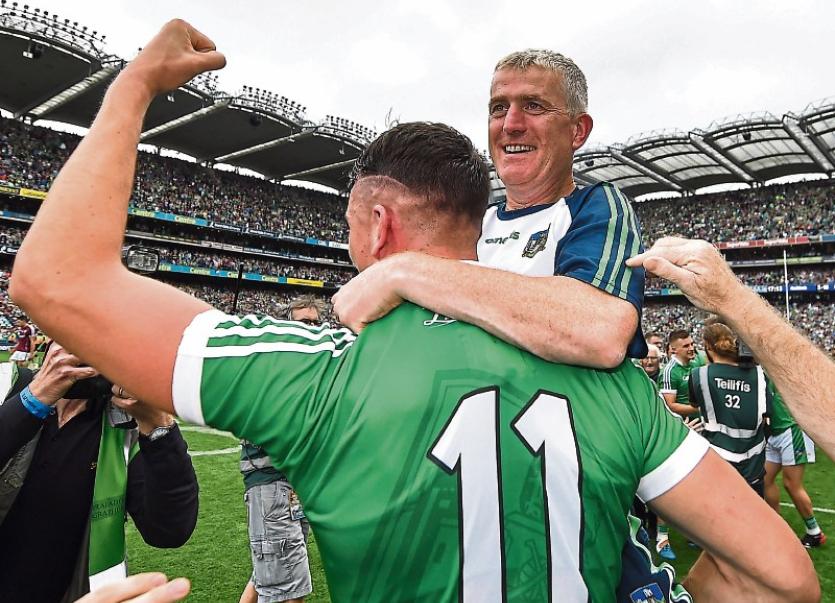 John Kiely and Man of the Match Kyle Hayes

Limerick ended a 45 year wait for a Liam MacCarthy Cup title but the manager is adamant they show humility.

While Limerick haven’t tasted senior success, the manager said that underage titles had not affected them.

“They’ve coped with everything so far. I suppose obviously we’re going to have to keep an eye out and look out for fellas. The most important thing is that they look out for each other and we spoke about it coming back on the bus yesterday, humility is one of the great attributes that all the great teams have had. If you look at the Kilkenny teams for the last 15 years, the humility that those fellas have shown is an example to all players I think,” outlined John Kiely.

”They’ve carried success very well on their shoulders and the challenge to these boys is to be able to carry their success on their shoulders and I think what we said yesterday was, the fellas we were a year ago, we’d like to be the same fellas in a year’s time. If we can be the same people we were a year ago in a year’s time, I think we’ll have done a very good job,” he explained.

"It wasn’t mentioned again until yesterday coming out from Croke Park because acknowledged it as one of the major stepping stones for the team this year because it meant so much to the players that we acknowledged the importance of the Fitzgibbon competition and allowed them to play the final and stay at home and celebrate with their college mates and they were given the freedom of the city for the night, ‘Go and do what you want to do, enjoy yourselves, we’ll see you on Tuesday night at training’. That’s important. We didn’t tell them they had to be home or not to drink or whatever it might be. We told them to go and enjoy themselves and I think that’s hugely important,” he detailed of his man-management.

Kiely pointed to the Allianz League win over Galway in March as a turning point for the season.

“In a hurling context, listen, Galway was big. We didn’t acknowledge that during the course of the season but that was a fairly big moment above there. We were, what, eight points down? Nine points down?

"Half-time, the temptation was there to make a few changes and we went into the dressing room with a completely different message. We told the players, ‘No, we’re here, you’re eight down, we’re trusting ye 100%, ye can turn this around’, and they took great confidence from that.