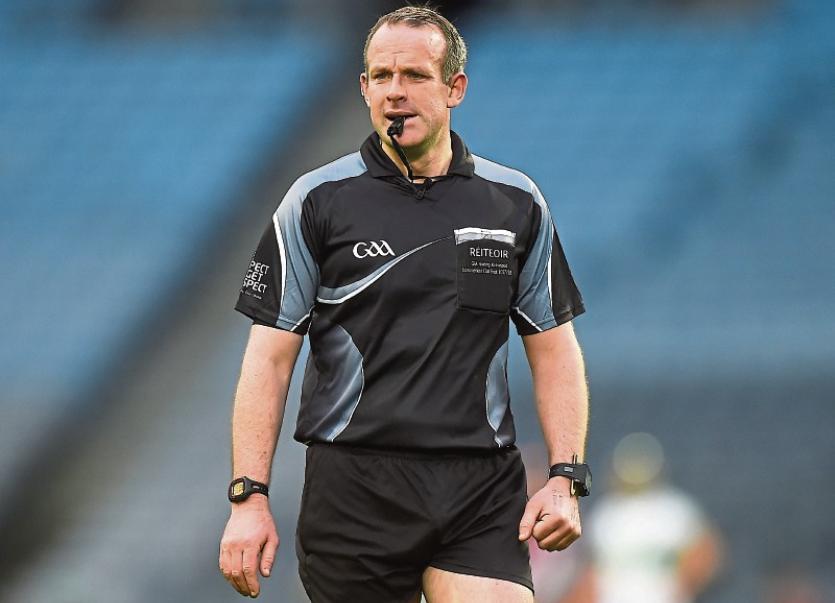 WIN, lose or draw five All-Ireland medals will make their way to Limerick following the GAAs showpiece day this Sunday!

And to mark the milestone occasion, Murphy and his four big match umpires will be presented with All-Ireland medals by the GAA.

Johnny Murphy played minor hurling and football with Limerick in 1996, before graduating on to play intermediate hurling with the green and white.  However, he is best known as an inter-county senior footballer.

Murphy first dipped his toe into refereeing when taking charge of an U12 football fixture between Coisle Gaels and Garryspillane in 2000. He was following in his father Seamus’ footsteps.

Johnny Murphy said: ”Basically, when I was a young fella, a garsún, my father Seamus was the big influence on me.

“He was a referee and when I was four or five years of age I was thrown into the car and brought off to matches and that is where I took up the love for GAA, for playing and refereeing too.”

Murphy, who turned 40 on Tuesday, was called up to the national referees panel in 2016 and this year the Limerick man was included among the 10 chosen to officiate at Liam MacCarthy fixtures, the pinnacle for an inter-county referee.

As the significance of the fixtures he takes charge of has grown, so too has the spotlight, the intense scrutiny from the press and pundits as well as GAA supporters on social media.

“When you get into the Liam MacCarthy panel, it is different, it is new to me, social media.

“I’m not big into it anyway, but even going home watching matches on the Sunday Game where you have analysts talking about you, it is different.

“It is great when things go right and thankfully so far I’ve had no problems, but I’m sure some day I will be up on the Sunday Game with a few problems. Look, that is the learning curve, that’s the game we are in, you have to get used to it.

“I absolutely hate watching myself on TV. I will watch the game about two or three weeks later.

“I am not one of these people who is rushing home to look at the game back on TV and the first thing I am looking for is the problem.

“I had two championship games this year in the Liam McCarthy, Galway against Offaly and Wexford against Galway. They went well. A few people said to me they thought I would be doing the All-Ireland quarter-final or maybe a semi-final. I just thought I wasn’t ready for that yet.

“I had an inkling I might get the minor final. Other referees were telling me they thought I would get it, but you don’t get it until you get the phone call to tell you.

“Referees want to be officiating on All-Ireland final day. I was lucky enough to be involved last year as the fourth official for the senior final. It was very nice to be in the middle of the field for Amhran na bhFiann with 83,000 people roaring.

“There is an awful lot of lovely, lovely GAA supporters out there, but there are a few other people in the stand and it (verbal abuse) does get to you but, look, you get used to it.

“The phrase in one ear and out the other comes to mind. You would love if you could put those people into the middle of the field for an hour and let them ref it there and see how they get it.

“I am very, very lucky with my umpires. I have some great fellas who have helped me back through the years, fellas who have travelled with me to matches in Donegal, Antrim, Tyrone, Mayo.

“My umpires for the final on Sunday are Mike Meade, James Hickey, my brother Jimmy-Barry Murphy and Kieran O’Callaghan. The thing is I can only bring four.

“I am very lucky to have up to 12 umpires who are very good to me, Pat Creed, Tom Coffey, Andy Dooley, Johnny Crawford, Danny Frewen, Stevie Fox and Jason Leigh. It is a pity I can only bring four.

“We will travel up on Saturday and are booked into a hotel that night. We are escorted to Croke Park at 11am on Sunday.

“After the match on Sunday, we have a meal with the President of the GAA. Each umpire receives their All-Ireland medal.

“The referee gets  a medal  as well but it will come at a special function at Christmas. You are well looked after.

“It is a great honour for my family, my club and my county. My wife Claire and three children Olivia, Evan and Conor, to be fair, there have been days I have gone off to do National League or championship games at 9.30am, don’t get home until 8.30pm.

“And the first thing I do when I get back is want to watch The Sunday Game. You need a very understanding wife and I am lucky to have one.

“My son Evan is only five and he comes to the under-age games with me as I did with my dad.

“When he heard I was doing the All-Ireland final - and he is going to the match - he said, ‘Dad, if you are stuck for an umpire, I could do it for you’. We might have another referee in the making there as well!

“I see it on social media, everyone thinks the referees are getting big money to referee the match on Sunday week. That is not the case.

“James Owens is refereeing the senior final on Sunday in front of 83,000 people and all he is getting is expenses. There is no fee, no big cheque at the end of it. Some people assume we are getting big bucks, but we are not. So why do you do it? You do it to referee on the day of an All-Ireland final. That is why.

“I played a lot of hurling with Glenroe and a lot of football with Ballylanders and Limerick.

“When my body started slowing down and I couldn't get to the ball fast enough, marking a player who is 20 years younger than me, my GAA from the playing side of things was finished.

“I finished playing with Ballylanders three years ago and  Glenroe two years ago.

“But I still wanted to be involved in GAA. The way I could be involved was through refereeing. That is the way I'm involved.

“We are in Dublin every three weeks. I am working in Dan Dooley Ford Centre in Knocklong and Jim Dooley, my boss, is very good to me.

“Referees put in a lot of work done behind the scenes. I reckon I am fitter now than I was when I was playing with Ballylanders, Glenroe and Limerick.

“The fitness aspect is massive, you make sacrifices.

“Even my diet has changed a lot. I don’t eat chocolate any more and I do like my chocolate!