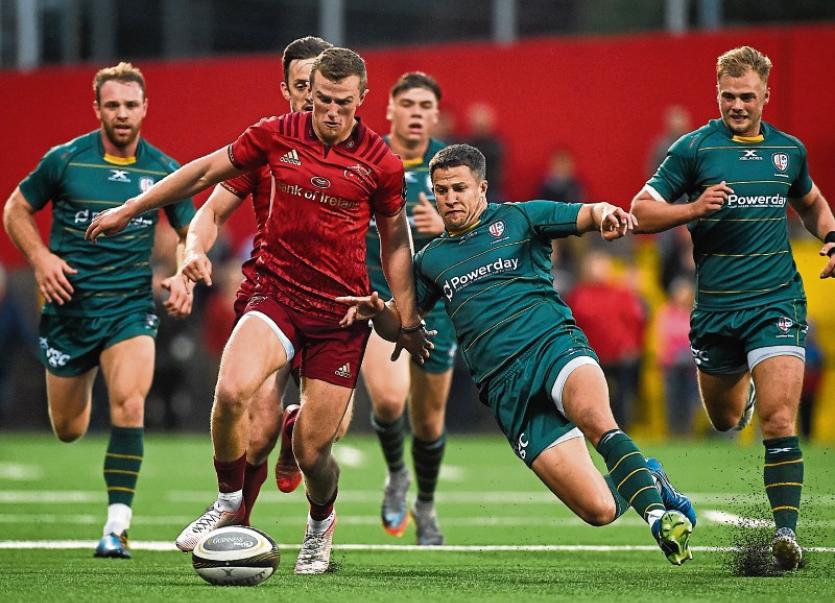 Stephen Fitzgerald, of Munster, in action against Fergus Mulchrone of London Irish in their pre-season friendly at Musgrave Park on Friday night

MUNSTER recorded victory in the first of two pre-season friendlies when edging past Declan Kidney’s London Irish side 32-28 on the new 3G playing surface at Musgrave Park on Friday night.

Head coach Johann van Graan gave game time to 31 players in all, with fit-again captain for the night Tommy O’Donnell playing for almost an hour over two periods. O’Donnell had not played for the province since picking up an unfortunate shoulder injury in March.

Munster scored five tries in all against the visitors, including a close range brace from hooker Mike Sherry and three more touchdowns from Brian Scott, Dan Goggin and the hugely impressive Darren Sweetnam.

This was a very useful work-out for Munster on the lively new 3G playing surface at Musgrave Park.

Visitors London Irish bagged the first points of the game very much against the run of play. The home side, who had dominated possession early on, coughed up the battle on half-way and from Fergus Mulchrone’s chip through, centre partner Matt Williams showed a fine turn of pace to score.

Munster responded quickly and decisively when flying winger Darren Sweetnam gathered his own grubber kick through before touching down two minutes later after centre Dan Goggin had forced the turnover.

While the conversion was missed, Munster took the lead, 10-7, in the 19th minute when the electric Sweetnam this time turned provider making big yardage after a well judged kick through. Tighthead prop Brian Scott was credited with the touchdown from close range.

Munster were two scores to the good on the half hour mark when out-half JJ Hanrahan landed a sweetly struck drop goal.

The artificial playing surface made for a quick tempo game, with the ball quickly being recycled and moved away from the point of contact.

Munster had their third try in the 35th minute when Goggin finished impressively in the right corner. Hanrahan landed a terrific conversion for 20-7.

Declan Kidney’s London Irish side grabbed the fifth and final try of the opening 40 minutes when prop Oliver Hoskins touched down from close range. Brophy-Clews conversion made it 20-14 at the change of ends.

The opening 15 minutes of the second half saw a host of personnel changes. The disruption brought an abrupt halt to the scoring rate.

Among those introduced off the bench was new full-back signing Mike Haley who joined the prvince on a three-year contract. The 23-year-old from Preston who has joined Munster from Sale Sharks is Irish qualified through his maternal grandmother who hails from Tralee

Munster did manage a fourth try in the 57th minute when, folliowing a well-executed maul, hooker Mike Sherry dotted down. Ian Keatley’s successful conversion made it 27-14.

Munster emptied their bench in the final quarter, with Limerick scrum-half Neil Cronin among those to see action. Cronin won four caps for the province in the 2014/2015 season and has returned to the Munster set-up this summer.

Munster grabbed their fifth try five minutes from full-time when hooker Sherry dotted down for a second time from close range to stretch their lead to 32-14.

Once more into the breach! @GarryowenFC Neil Cronin is on for Munster. Scrum-half back with province after winning 4 Pro14 caps in 2014-2015 #Munster #MUNvLIR @Limerick_Leader pic.twitter.com/IkWFuIWo8u

‘Irish’ did hit back with two late tries, from an excellent late try from winger Topsy Ojo and the second from Scott Steele. However, Irish were flattered to be within four points at full-time.

It’s Champions Cup pool opponents Exeter Chiefs for Munster in the second of their two pre-season friendlies at Musgrave Park on Friday next, 7.30pm