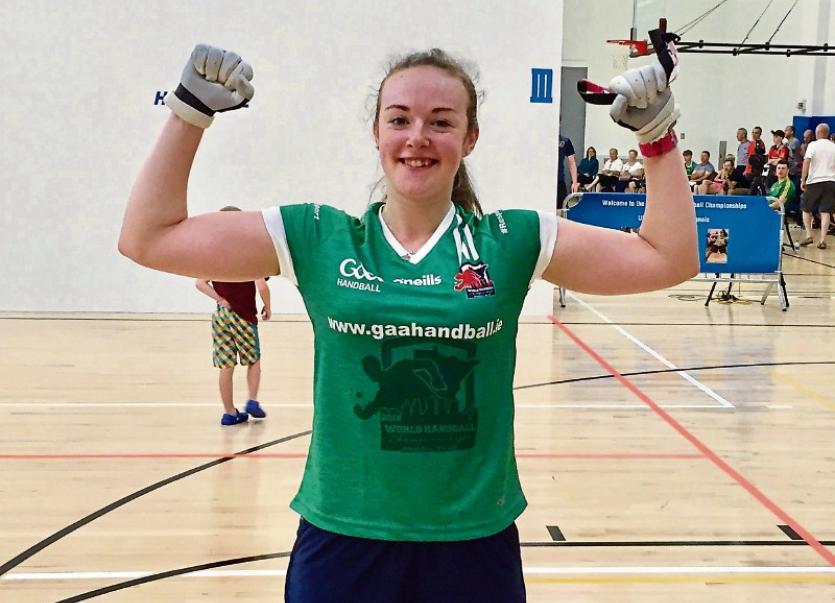 WORLD Handball success for Martina McMahon this week at the World Championships in Minnesota.

The rising star of Irish handball now turns her attention to the Ladies Open - the premier grade at the championships.

Irish Women’s Team captain, McMahon is also listed to play in the doubles.

McMahon attacked from the outset going for kills when given half a chance, she built up a good lead but Daskalakis was trying every trick in the game to claw her way back but McMahon closed it out 21-15.

In the second set the American started the brightest but McMahon kept with her for long periods. Daskalakis led 20-12 at one stage but McMahon dug deep and fought back to trail 18-20 to the delight of the large crowd. But the American got the final ace she needed to setup an eagerly anticipated tie-break.

McMahon was very composed in the tie-break and started well even though points were hard to get, but with some excellent attacking shots she went into an early 6-2 lead.

The Limerick star was really playing to the crowd and she extended her lead to 9-4. The American tried everything but today the girl from Limerick was on top of her game and she celebrated in style when she took the tie-break 11-4 to be the first Irish person to win a Wallball World Senior title.

While McMahon is the only member of the official Irish team from Limerick, there are other local entries with club members from Hospital, Broadford and Galbally.

Ten countries are represented in the 2018 World Handball Championships, with Ireland and the USA currently fighting for dominance as the sports leading nation. Other countries include Canada, Mexico, Japan, Australia, Ecuador, Honduras, Costa Rica and Puerto Rico.