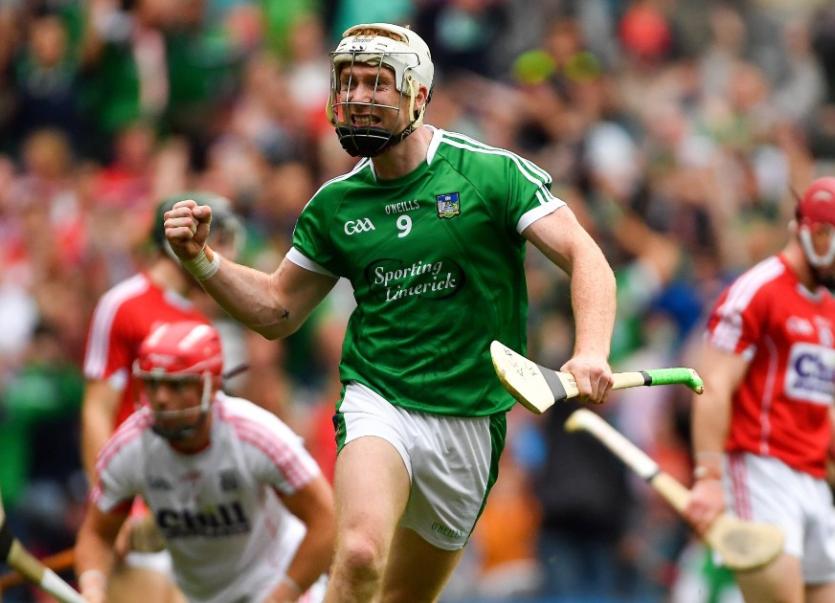 Cian Lynch celebrates after scoring his first half goal

LIMERICK are back in the All Ireland senior hurling final after an 11-year absence.

Two goals in the second period of extra time booked an August 19 final against Clare or Galway.

Limerick trailed by six points with less than 10-minutes to play in normal time but struck seven points in a row to battle back.

The goal came just on the stroke of half time from Cian Lynch, who burst through the middle to collect a great crossfield pass from Seamus Flanagan who did well to gather the sliothar in the corner.

The sides exchanged early points to leave it 0-3 each after seven minutes.

A second point of the game from Gearoid Hegarty had Limerick ahead for the first time in the seventh minute. That lead was soon 0-5 to 0-3 when Aaron Gillane pointed.

The first goal chance of the semi final came in the 10th minute but Gillane's kicked effort just flew over the crossbar.

When Cork rattled off three successive points the game was back level - 0-7 each with 18-minutes played.

Then came another goal chance and again Gillane was forced to kick after 'losing' his hurley but his effort was weak and one of the six wides in the half.

Graeme Mulcahy then exploded into the game with the next three points for John Kiely's side but still no seperating the teams - 0-11 each with 31-minutes gone.

Undeterred the men in red pushed 0-13 to 0-11 ahead with two minutes of injury time approaching.

Cork looked to take the lead into half time but Cian Lynch had the final say when he found the net with Limerick's third goal chance of the half.

Limerick have five early second half wides and Cork worked a 0-20 to 1-15 lead after eight minutes. Cian Lynch did see a goal chance saved in the seventh minute.

With Patrick Horgan winning and scoring frees, Cork were soon 0-22 to 1-16 ahead.

They then made a break for the winning line with a 53rd minute goal - Conor Lehane breaking past the defence to move his side 1-23 to 1-18 ahead.

Limerick responded with Peter Casey and Shane Dowling introduced and both made an impact but nonetheless Cork were 1-26 to 1-20 with 61-minutes gone.

Gillane frees either side of a Kyle Hayes point started the fightback.

A Pat Ryan pass to Casey was too high but Limerick didn't need a goal and Dowling and Gillane points from play levelled the game for the 12th time.

Cork weren't done and Nickie Quaid pulled off one of the finest of saves to deny Harnedy.

Gillane's 11th point could have been the winner but it was Horgan's ninth that had the sides level for the 13th time and thus extra time.

Limerick were 1-30 to 1-29 ahead at half time in extra time. Another goal chance went abegging but but Gillane did get a point when he drive flew over just 90-seconds into extra time.

Dowling impressed when introduced and had his third point from play to help move the men in green, 1-30 to 1-28 ahead but a Horgan free ensured just one point between the teams at the end of the first 10-minute period of extra time.

In the second period of extra time came two goals.

Shane Dowling fired home the first from the penalty spot after he was fouled.

Before Cork could respond, Pat Ryan added another goal and Limerick were final bound.

There was even time for subs Barry Nash and David Reidy to add points, although Cork did find a late consolation goal.